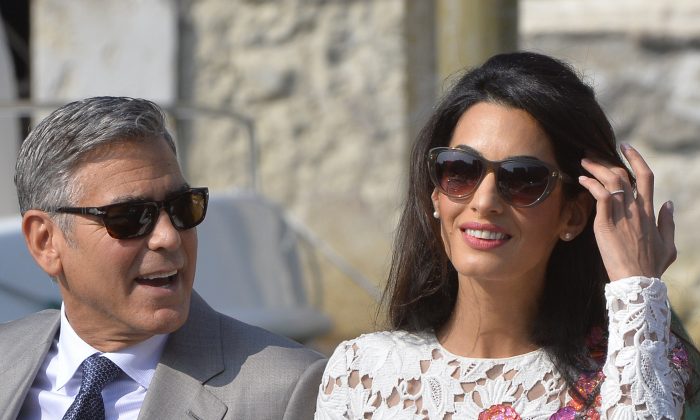 US actor George Clooney and his wife Amal Alamuddin stand on a taxi boat on the Grand Canal on September 28, 2014 in Venice. (AFP/Getty Images)
Entertainment

George Clooney Tries to Get Back at Brad Pitt by Inviting Jennifer Aniston to Dinner: Report

George Clooney is allegedly at “war” with former best friend Brad Pitt after Pitt and wife Angelina Jolie failed to show up for Clooney’s wedding to Amal Alamuddin.

Pitt also recently admitted that he still hasn’t gotten Clooney and his new wife a gift.

Now Clooney is getting back at Pitt by inviting Jennifer Aniston and her fiance Justin Theroux to his home for dinner later this month, according to the National Enquirer tabloid.

“This is going to enrage Brad and Angelina, but George has had enough of their snobbery,” said an insider.

“He’s always remained friends with Jen after she and Brad divorced, but George didn’t make things public out of respect for his friend. All that’s changed now.”

Clooney knows that the invitation will upset Pitt but apparently doesn’t care.

“George couldn’t give a damn if it upsets Brad!” added the source.

Pitt and his wife missed the wedding in September because they felt they couldn’t pull away from their upcoming romantic drama By the Sea, reported Yahoo.

The pair are shooting the film in Malta. Jolie wrote the script and is directing in addition to starring alongside Pitt.

Meanwhile, Pitt recently tried to correct the notion that Clooney is unreachable.

“You know, George is extremely accessible. He’s one of our best representatives. He’s funny as [expletive],”Pitt told GQ magazine for its November issue. “He’s a joy to be around. I guess maybe I’m more of a miserable bastard.”

While a number of stars such as Matt Damon and Bill Murray were able to make it, some others weren’t, like Ben Affleck.

“Some people have to work and everybody else gets to be in Venice,” Affleck told ET Canada. “But [George] found a great girl and I’m happy for them. I wish them the best.”