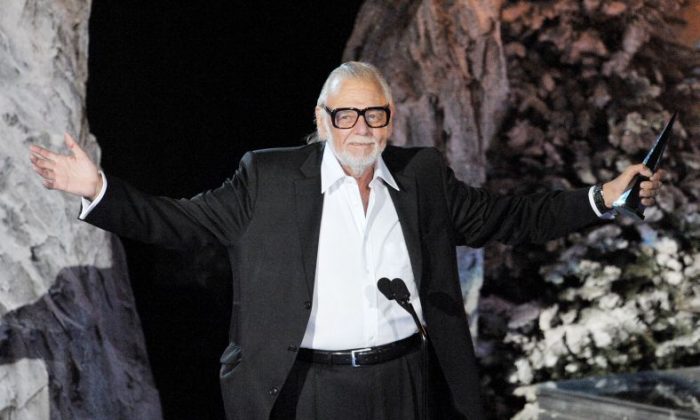 George A. Romero, Man Behind ‘Night of the Living Dead,’ Dies

George A. Romero, the director behind the pioneering “Night of the Living Dead,” has died. He was 77.

Romero—who also directed other zombie apocalypse movies “Dawn of the Dead” and “Day of the Dead”—died on Sunday after a battle with lung cancer, his family said in a statement, as reported by The Associated Press and other media outlets.

“George A. Romero passed away on Sunday July 16, listening to the score of ‘The Quiet Man,’ one of his all-time favorite films, with his wife, Suzanne Desrocher Romero, and daughter, Tina Romero at his side,” the statement said, as Variety reported. “He died peacefully in his sleep, following a brief but aggressive battle with lung cancer, and leaves behind a loving family, many friends, and a filmmaking legacy that has endured, and will continue to endure, the test of time.”

“The zombies, they could be anything,” Romero told The Associated Press in 2008 of his movies. “They could be an avalanche, they could be a hurricane. It’s a disaster out there. The stories are about how people fail to respond in the proper way. They fail to address it. They keep trying to stick where they are, instead of recognizing maybe this is too big for us to try to maintain. That’s the part of it that I’ve always enjoyed.”

“He really was what you didn’t expect. He was incredibly gentle,” said Gaylen Ross, who appeared in “Dawn of the Dead” and his 1982 film “Creepshow.” ”He had this optimistic purity about friendship and honor. No matter how insane the demands were on the film, I never saw a crew that was so willing to do whatever they needed for George.”

He’s survived by his wife, daughter, and two sons.