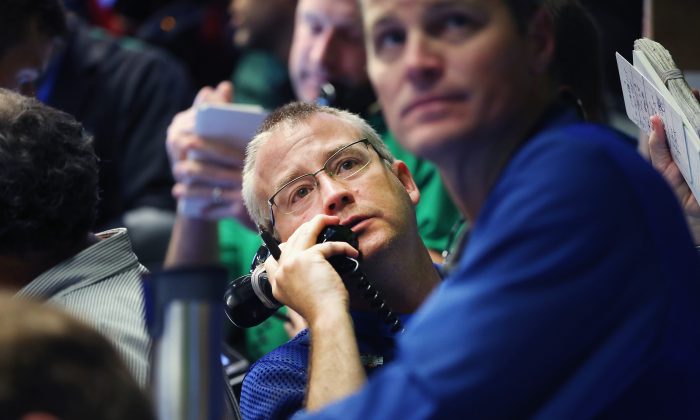 A trader takes an order in the options pit at the Chicago Board Options Exchange (CBOE) on July 30. (Scott Olson/Getty Images)
Business & Economy

U.S. Treasury bonds were the biggest winners last week, with the 10-year notes rising the most in over one month as retail investors fled riskier asset classes for the safety of government bonds.

Yields on both the 10- and 30-year Treasuries were among the lowest in a year (bond yields and prices move in opposite directions), as global geopolitical tensions escalated late last week.

Later on Saturday, Obama signaled that U.S. involvement may be extended if necessary, after he refused to set an end date for military strikes.

The developments followed ongoing tensions between Israel and Hamas in Gaza, military strife in Ukraine, and Russia’s ban on food imports from the West.

Government bonds rallied almost daily in the last two weeks, in line with stocks, which have been on a decline as daily news feeds highlighted ongoing instability in the Middle East and Eastern Europe. In a normal market, bond and equity prices tend to move in opposite directions.

The Dow Jones Industrial Average is down 2.1 percent, or 352 points, over the trailing 30 days. The broader S&P 500 Index fell 1.6 percent during the same period.

High-yield debt, or junk bonds, was already considered to be overpriced even before the recent stretch of geopolitical tensions.

Due to junk bonds’ stock-like susceptibility to macro shocks, the recent geopolitical worries were simply the final ingredient of this deadly concoction.

According to fund data research firm Lipper, investors pulled out more than $7 billion from junk-bond mutual funds and exchange-traded funds in the week ending Aug. 6, a record amount. It was the fourth consecutive week of redemptions for the sector.

Since the financial crisis, companies with weak balance sheets took advantage of a low-interest rate environment and issued massive amounts of debt. Income-starved investors were more than happy to snap them up. But now, the junk bond market’s multiyear bull run appears to be over.

Barclays believes that, while retail investors have been frightened away, macro-economic trends indicate that the high-yield market has been oversold. “Since we do not believe there has been a material negative change in credit quality or the domestic macro backdrop in the last quarter, we think that this move is overdone and prefer high yield credit to investment grade credit,” the bank wrote in a research note to investors Aug. 8.