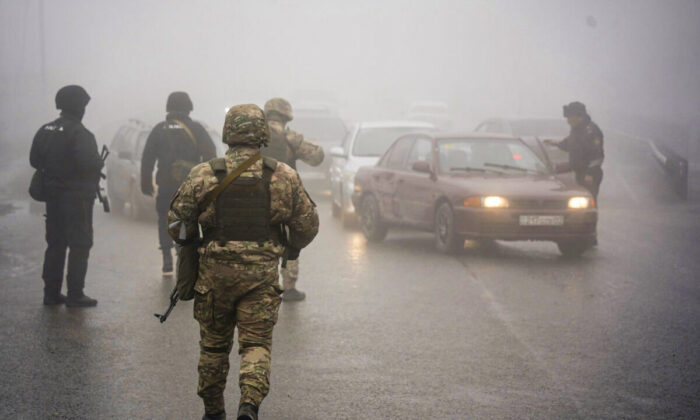 Geopolitical and Economic Reasons Behind China’s Support of Kazakhstan’s Suppression of Protests: Experts

Large-scale protests recently broke out in Kazakhstan, with the country’s president ordering the military to suppress it with force. Chinese communist leader Xi Jinping praised the Kazakh president’s actions in the situation as “decisive” and “strong.” Experts say there are multiple factors behind the outbreak of civil unrest in Kazakh that have made the CCP authorities uneasy.

In the worst unrest in Kazakhstan in more than a decade, protesters are angry about soaring fuel prices and took aim at the authoritarian government, as well as former president Nursultan Nazarbayev, tearing down a statue of him.

Kazakhstan’s new president, Kassym-Jomart Tokayev, said he ordered troops to open fire without warning in order to restore order. Tokayev accused foreign-trained terrorists of carrying out the riot, but provided no evidence.

Tokayev also said that, at his request, Russia troops had arrived in the country and stayed there temporarily to ensure safety.

Xi said that China opposes foreign forces inciting “color revolutions” in Kazakhstan and any “attempts to interfere with cooperation between the two countries.” He also mentioned that China is willing to provide support to Kazakhstan.

International observers believe there are deeper reasons behind the Chinese regime’s support of the Kazakhstan government.

Prof. Feng Chongyi, a China expert at the University of Technology Sydney, told the Chinese edition of The Epoch Times: “The civil strife in Kazakhstan has more to its history. The people’s opposition to fuel price increases was only a fuse, and behind it is the long-term corruption of the country’s government and its oppressive attitude towards its citizens, and the economic plunder of the Chinese communist regime’s Belt and Road Initiative.”

As to why Xi expressed support for the current Kazakh government, Su Ziyun, a military expert at the Taiwan Institute for National Defense Security, said that, if the color revolution in Kazakhstan succeeds this time, the people who oppose the investment scheme of the Belt and Road Initiative will join forces, which will definitely change the CCP’s investment in the country, all of which make Xi Jinping and the Chinese regime uneasy.

Su said it is worth noting all the drivers behind the protests in Kazakhstan. One is geopolitics, because Kazakhstan is close to China’s Xinjiang region. In terms of energy security, about 50 percent of Kazakhstan’s oil and natural gas are now exported to neighboring China. The other reason is the economy. China has invested nearly $23 billion in construction projects of its Belt and Road Initiative in Kazakhstan. If the political situation in Kazakhstan is unstable or the regime changes, these Chinese investments may be at risk.

In addition, there are many anti-communist China forces in Kazakhstan. These people believe that the Chinese regime’s investment in the Belt and Road Initiative has planted a “debt trap” for Kazakhs.

Su added that the diplomatic or political situations in the countries surrounding China are almost all unstable: in addition to Kazakhstan in the northwest, there are Afghanistan and India in the southwest, North Korea in the northeast, Japan and Taiwan in the east, and countries around the South China Sea in the south.

It can be said that Beijing’s international diplomatic model in the past decade—economic plunder and military expansion—is the main cause of Beijing’s current strategic predicament, he said.

Luo Ya and Li Jing contributed to the report.