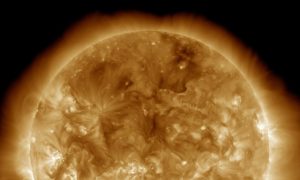 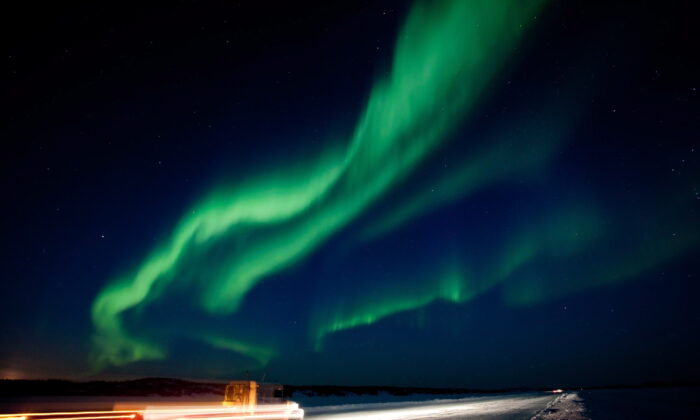 A brilliant show of the aurora borealis near Yellowknife, N.W.T. is shown in the night sky on March 8, 2012. (Bill Braden/The Canadian Press)
Canada

A minor geomagnetic storm is expected to reach peak strength on Thursday, and may cause “weak power grid fluctuations,” the U.S. Space Weather Prediction Center said.

The G1 geomagnetic storm was observed on Tuesday as its strength increased over the past few days, according to the center. An initial alert warned of possible “power system voltage irregularities” and false alarms on certain protection devices.

Geomagnetic storms are major solar activities, such as the sudden changes in the speed and strength of the solar wind, that can disrupt the Earth’s magnetic fields and directly affect operations like mineral exploration, navigation compass, and directional drilling. The storms duration can vary from hours to days, according to Space Weather Canada.

The U.S. National Oceanic and Atmospheric Administration (NOAA) measures the strength of geomagnetic storms on a scale of G1 (minor) to G5 (extreme). The storm activity on Thursday is estimated to be on G1 (minor) level, which can bring “intermittent satellite navigation and low-frequency radio navigation problems.”

Geomagnetic storms can also generate unexpected electric currents, damaging power transmission system and causing blackouts. One notable case was the March 1989 Quebec Blackout, in which the Hydro-Quebec power grid collapsed, leaving 6 million people in Quebec and the northeastern United States out of power for several hours.

“We are prepared,” Brett Hallborg, the senior system control manager at B.C. Hydro, told the Vancouver Sun. “What it does is it causes our power equipment to malfunction. It could lead to a widespread power failure, which is what happened in Quebec in the 1980s.”

However, Hallbrog said that power cuts are the worst-case scenario and is unlike to occur this time.

“Our plan is to try and make the power systems as robust as we can,” he said. “The currents that could be induced in the Earth’s surface are what we are nervous about.”

Aurora may be seen as low as Pennsylvania to Iowa to Oregon due to the geomagnetic storms.