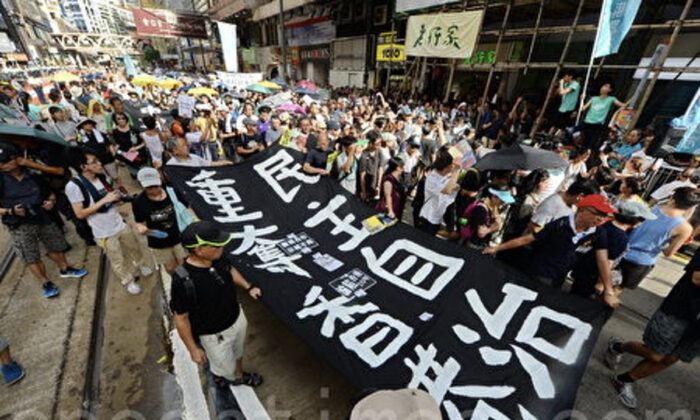 ‘Gentle Nudge’ From US Consul General to the CCP: Let Hong Kong Be Hong Kong

While America had been supportive of Hongkongers’ fight for freedom, a scholar indicated that the message Washington sent was “soft on CCP.”

The scholar also believed that the chance of the CCP “letting Hong Kong be Hong Kong” would be zero in the foreseeable future.

Smith cited the annual reports of the United States-Hong Kong Policy Act for the past three years. He pointed out that Hong Kong had lost the autonomy it once had. “CCP’s meddling in Hong Kong’s political systems, elections, and judicial independence has caused the core of democracy to collapse.”

Smith also stated that CCP’s unprecedented interference extended to academia, culture, and freedom of the press. Multiple civic organizations have been forced to disband during the past three years.

The Epoch Times interviewed Former Assistant Professor of the Department of Politics and International Relations at the Hong Kong Baptist University, Wong Wai-Kwok.

Professor Wong commented, “the CCP’s interference in Hong Kong is notorious.” Wong had not seen any evident measures that the United States and the United Kingdom would take. But, he indicated that the Hong Kong diaspora would continue to lobby Western countries and expose the CCP’s infiltration.

Wong said Hongkongers who fled made it a mission to unveil CCP’s evil doing to Hong Kong’s education and culture. “They also want to reveal the threats CCP has against the global economy and the world.”

Hint or a Gentle Nudge?

On July 5, 2022, leaders from American and British intelligence agencies gave their speeches jointly for the first time. They warned the world of the CCP’s forceful approach to stealing intellectual properties for itself. The secret service leaders emphasized CCP’s enormous threats to both countries interests.

Consul General Smith urged Beijing to let Hong Kong be Hong Kong. He reiterated that America had always wanted the city to succeed; America would expect China to keep its promise of allowing Hong Kong autonomy.

According to Wong, what Smith said was nothing new: He simply repeated the Biden Administration’s position.

Wong pointed out, “As of the first half of 2022, Washington has yet to enforce any new policy on Hong Kong. There is also no further sanctions against Hong Kong Government (HKgov) officials or National Security judges.”

Therefore, Wong was unsure if the consul general’s speech was the U.S. giving a soft hint to CCP or for HKgov to react, or if it was only another reminder on backing Hongkongers.

Wong sees no change of stance by the three government yet.

Wong stated the reason Hong Kong still had value to the U.S. would be the spectacular investments the U.S. had poured into the city. He continued, “The U.S. is also using Hong Kong as a piece on its board of monopoly against China.”

He assumed that the lack of mutual consensus between Washington and Beijing could be interpreted as a sign of “no compromises on Washington’s policy toward China.”

Wong also pointed out that the situation had deteriorated and he could not decide if it would eventually reach a dead end.

“If it gets to the point where it forces American companies to flee to Japan, Taiwan, or Vietnam, Hong Kong will officially run out of luck,” Wong warned.

In 2020, the United States ceased the “United States-Hong Kong Policy Act” in response to the National Security Law implementation. As Wong suggested, its impact proved to be detrimental to Hong Kong.

Wong explained that Hong Kong had lost its privilege. “Whatever is made in Hong Kong has to be labeled as “made in China” from that point on. Hong Kong products were also subjected to the same tariffs and trade sanctions as CCP. Despite Hong Kong being bound, Wong said no businessmen spoke or fought for Hong Kong’s stand-alone trading position.

Wong said since then, HKgov had taken the same one-sided approach as the CCP.

He revealed, “Not only does it show hostility against the western world, Hong Kong now recites the CCP’s threats. The new Chief Executive, John Lee Ka-chiu, called foreign countries ‘villains’. Hong Kong has dug its own grave even deeper.”

“As long as the national security law exists, we can only watch Hong Kong die.”

According to the professor, many people didn’t understand that Hong Kong’s prosperity was mainly because it had been positioned as an international city. It had been a bridge between the world and China. “Now the bridge has collapsed. Why would people still come to Hong Kong for business if there is no longer a middleman? Why not go to Shanghai?”

Wong said only time could tell if the death of Hong Kong would be short or long, and how painful it might be. “All we can do now is watch Hong Kong approach its death. It is impossible to let Hong Kong be Hong Kong again.”