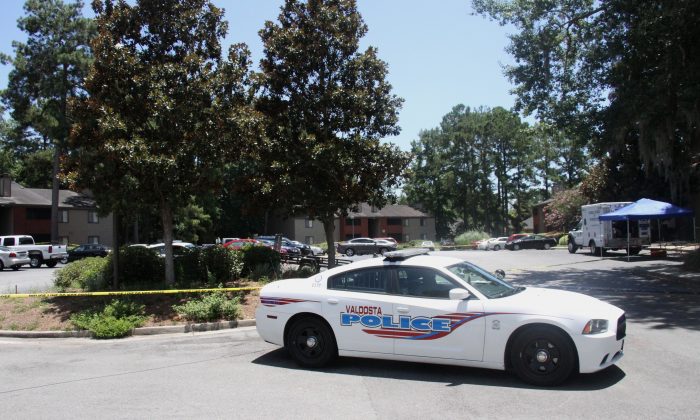 A police vehicle parks near the scene of an officer involved shooting in Valdosta, Ga., on July 8, 2016. (Gabe Burns/The Daily Times via AP)
Crime and Incidents

VALDOSTA, Ga.—Police say a Georgia police officer and his assailant should survive a shootout that began with an ambush only hours after a sniper in Dallas killed five officers and wounded seven more.

Stephen Paul Beck, a 22-year-old recovering drug addict, is accused of calling 911 to lure police to his apartment complex in Valdosta and then opening fire.

Officer Randall Hancock’s protective vest took some of the bullets, but he was hit once just below it, in the abdomen, Georgia Bureau of Investigation spokesman Scott Dutton said.

It’s been a tense week between white police officers and black civilians. In this case, the suspect is Asian, and the officer is white.

Dutton said there’s no evidence to support a connection with the shootings in Dallas. Investigators are looking into whether Beck might be angry at police in general, but Dutton said “there’s nothing that indicates he’s got that type of an issue.”

Hancock underwent surgery at a local hospital and was stable Friday as he rested with his family by his side, the chief said. The suspect was also considered stable, he said.

The police chief said Hancock was wearing a body camera, and its video footage had been turned over to the GBI.

Friends and neighbors of Beck said they were stunned. He had moved to Valdosta years ago from metro Atlanta to check into a live-in treatment center for people with chemical dependencies, but several people who knew Beck said he had turned his life around.

“He’s one of the kindest, most gentle people — just genuinely so,” said Taki Zambaras, who ran the treatment center.

When Beck arrived at the treatment center, he was “an angry, insubordinate, very confused kid who wanted to leave every day,” Zambaras said, but he worked hard in the kitchen and at maintaining the long clay road leading to its doors.

“He left us in pretty good shape emotionally, physically and spiritually,” Zambaras said. “He kept in touch with us after he left and even came back and volunteered his time with guys who were going through the program.”

Residents at the apartment complex where the gunfire erupted Friday recalled seeing Beck smoke on his balcony or chatting with neighbors.

Darius Sheffield said they recently talked about the NBA finals and current movies. “It doesn’t seem like him,” he said. “The entire thing is kind of weird.”

Steven Bowers, 21, said he thought he was hearing firecrackers until a bullet ripped through the siding of his unit, whizzed by his roommate’s head, bounced off the wall and landed on a bed.

Bowers said he grabbed his own gun and looked outside when the shooting stopped. He saw the officer on the ground, but didn’t see beck until he was carried away on a stretcher with blood on his face.

Beck had been a roommate of Jason Sobczak’s at a different Valdosta apartment. Sobczak said he last saw Beck at a meeting about three months ago and he seemed happier and healthier than ever.

“He was adopted, but he came from a good family,” Sobczak said. “At heart he’s a teddy bear. Stephen had really turned his life around. He was very active, pro-active and he looked good.”

J.C. Cunningham, who owns a Valdosta painting business, said he hired Beck for several months while he was in treatment.

“He was a good kid … and really remorseful, I think, about some of the troubles he had gotten into in the past,” Cunningham said. “One thing I do remember him saying a couple of times is he didn’t want to go back home because he didn’t want to be back around the same crowds.”

It was not immediately known if Beck had an attorney.

There was no answer Friday evening at the door of an address listed for Beck’s parents in Kennesaw north of Atlanta. A message left at a home phone listing for the family was not immediately returned.