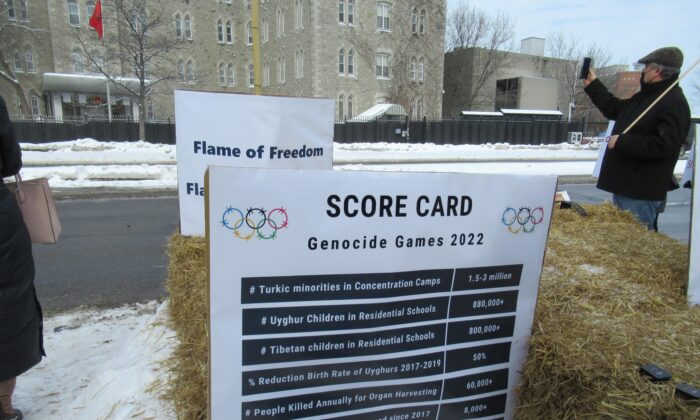 A score card that keeps track of the crimes against humanity committed by the Chinese regime is seen during the “Genocide Games” protest in front of the Chinese Embassy in Ottawa on Feb. 4, 2022. (Donna Ho/The Epoch Times)
Canada

As the opening ceremony for the Winter Olympics was taking place in Beijing on Feb. 4, a coalition of human rights groups held their version of a ceremony outside the Chinese embassy in Ottawa on the same day, calling the international sporting event the “Genocide Games.”

The half-hour ceremony, co-organized by advocacy groups such as StopUyghurGenocide Canada, the Canada Tibet Committee, the Uyghur Rights Advocacy Project, and the Federation for a Democratic China, called attention to the human rights’ violations of the Chinese Communist Party (CCP).

“The Olympics in Beijing should not be happening, but they are happening,” said event spokesperson Phil Kretzmar, co-founder of StopUyghurGenocide Canada, in an interview with The Epoch Times on Feb. 4.

“We felt that rather than do anything to celebrate or recognize the Olympics, we needed to stand in solidarity with and in support of those that have been persecuted by the Chinese government and that are suffering from their persecution.”

The targeted communities, according to the organizers, include the genocidal campaign against Uyghur Muslims, the continuing repression of Tibetans, the over two-decade persecution campaign against Falun Gong adherents, the crackdown on freedom and democracy in Hong Kong, and the denial of basic freedoms to all Chinese citizens.

The alternative ceremony included the presentation of a “medal of genocide” to Chinese leader Xi Jinping, whose regime has gone “faster, higher, stronger in assaulting human rights and respect for human dignity,” according to the coalition.

Chinese-Canadian democracy activist and author Sheng Xue said it’s hard to understand why the CCP, with its record of crimes against humanity, was given permission by the International Olympic Committee (IOC) to hold the Games for the second time. The 2008 Summer Olympics were also held in Beijing.

“Why does the world allow the CCP to be so arrogant, to give the regime such an opportunity, such an honour, to use the Olympics as a political platform to challenge the whole world?” said Sheng, also vice-chairperson of the Federation for a Democratic China, in an interview during the protest.

“I think the Olympic Committee must have been deeply infiltrated by the CCP, since it has repeatedly defended the regime.”

When asked about China’s human rights violations against the Uyghurs during a press conference in Beijing on Feb. 3, IOC president Thomas Bach said the IOC must avoid taking “a political standpoint” in order to protect the Games’ “universality.”

“The position of the IOC must be given the political neutrality that we are not commenting on political issues,” he said.

According to the current Olympic Charter, one of the core principles of Olympism is the promotion of “social responsibility and respect for fundamental ethical principles.”

The Ottawa protest, which included a simulation of the lighting of the Olympic flame, stood in contrast to the flame lit in Beijing, according to Mehmet Toti, executive director of the Uyghur Rights Advocacy Project.

“The lighting of the Olympic flame in Beijing cannot hide the fact that the Chinese government is committing what Canada’s Parliament has declared to be genocide against the Uyghurs and other Turkic minorities,” Toti said in a press release on Feb. 4.

“The Chinese regime is holding at least one million Uyghurs in detention centres and using many others as forced labour. It is a breaking up our families, sterilizing our women and systematically destroying our culture, our heritage, and the practice of Islam.”

Tsewang Dhondup, a Tibetan activist from Toronto who joined the protest in Ottawa, said the Chinese police fired shots at him when he participated in a 2008 Beijing Summer Olympics protest in Tibet in March of that year.

“I marched along with 300 other Tibetans from my hometown, Kham Tehor, on the street and shouted slogans against discriminatory Chinese policies and practices,” he said in a statement released by the Canada Tibet Committee on Feb. 4.

“Unfortunately, the Chinese armed forces started shooting at us in response to our peaceful protest.”

Dhondup was shot on his lower abdomen and left elbow when he tried to rescue a 16-year-old monk who was also shot, and later died due to the wound. Dhondup suffered permanent damage to his left arm.

“At least five other Tibetans were shot that day, and their status is still unknown to date,” said the Tibetan activist, whose friends helped him escape into the mountains where he hid for over 13 months before he managed to escape the country.

Conservative MP Garnett Genuis, who also joined the protest, stressed the importance of standing up to the communist regime in Beijing in light of its “escalation of human rights abuses” against the Chinese people, particularly minority communities.

“I wanted to be here today to show support for those who are concerned about how the Beijing Olympics are going to try to whitewash the crimes of the Chinese Communist Party,” Genuis told The Epoch Times.

“It’s important for us to be here today to say no, to tell the Chinese Communist Party that we do see them, we see the crimes that are happening, and we stand with the victims.”