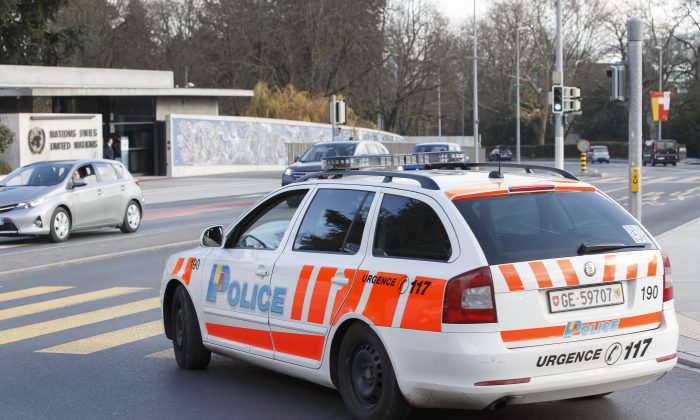 GENEVA—Working on a tip from the CIA, Geneva police were hunting for at least four suspects allegedly linked to the radical Islamic State group and believed to be plotting a “specific” attack in the city, Swiss officials said Thursday.

As city police raised their security alert level, Swiss state prosecutors opened investigations into a suspected criminal plot and suspected violations of a ban into groups like Islamic State and al-Qaida.

The CIA alerted Swiss authorities to the four men on Wednesday, prompting the manhunt, a Swiss official with knowledge of the investigation told The Associated Press on Thursday. He spoke on condition of anonymity because of the sensitivity of the matter.

The official confirmed the suspects were four men shown in a photograph linked to a news report in Swiss daily Le Matin. They were pictured each in a crouched pose and holding up an index finger—said to be an Islamic State gesture.

It was too early to determine whether other suspects might still be at large, the official said. He also declined to identify the names, ages or nationalities of the people being sought.

The Geneva security department said Swiss national authorities flagged “suspicious individuals” who could be in Geneva or the vicinity to city authorities on Wednesday. It didn’t specify how many people were being sought or name them.

The official said, however, the suspects were not believed to have had links to the Paris terror attacks, appearing to revise an earlier statement from the Geneva security department.

Heavily-armed police carrying submachine guns stood guard outside diplomatic missions in Geneva on Thursday. Normally, officers carry lighter weapons. Geneva police were also deploying more officers at the city’s train station and airport. The U.N. office in Geneva was also increasing its security precautions, even though it said there was no indication of any specific increased threat against U.N. staff.

Police were working with international and national authorities to locate suspects they believed to be in the Geneva region, officials said.

“We have gone from a vague threat to a specific one,” Emmanuelle Lo Verso, a spokeswoman for the security department, told the AP.

The Geneva prosecutor’s office said an official investigation has been opened into “criminal preparatory acts”—a charge against anyone who takes “concrete measures of a technical or organizational type in the aim of committing a grave infraction.”

The Nov. 13 attacks on Paris, claimed by the radical group, left 130 people dead and hundreds of others wounded. Two fugitives including Salah Abdeslam—who slipped through the fingers of French police hours after the attacks—remain at large. Several arrests were made in Belgium following the attacks.

Abdeslam wasn’t among those being sought Thursday, a Swiss police official said. He spoke on condition of anonymity because he wasn’t authorized to discuss the matter.