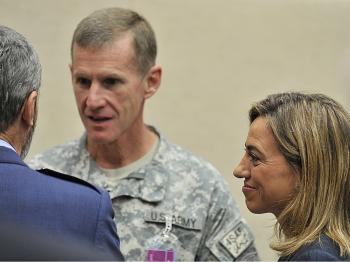 The top US commander in Afghanistan, General Stanley McChrystal (C), speaks with Spanish Defense Minister Carme Chacon (L) on June 11, 2010 before the start of the NATO defense ministers meeting in Brussels. (Georges Gobet/AFP/Getty Images)
US

David Sabatini
View profile
Follow
biggersmaller
Print
The top commander of the NATO forces in Afghanistan, General Stanley McChrystal, was reportedly recalled to Washington early on Tuesday. The recall comes after excerpts of a Rolling Stone magazine story on McChrystal, titled "The Runaway General," revealed that McChrystal was at odds with members of the Obama administration on the strategy for the war.

The profile article, set to appear in Friday’s edition of the magazine, reveals that even though General McChrystal voted for President Obama, McChrystal and his new commander in chief failed to connect from the very beginning.

“The general first encountered Obama a week after he took office, when the president met with a dozen senior military officials in a room at the Pentagon known as the Tank,” an excerpt from the Rolling Stone article states.

“Their first one-on-one meeting took place in the Oval Office four months later, after McChrystal got the Afghanistan job, and it didn't go much better,” continued the story written by a journalist who was allowed to travel for several days with General McChrystal.

Excerpts of the Rolling Stone report became viral on the Internet after they were published. U.S. Defense Secretary Robert Gates said in a statement that he summoned General McChrystal back to Washington to discuss in person his derogatory comments about members of the Obama administration published in the article.

"We are fighting a war against al-Qaeda and its extremist allies, who directly threaten the United States, Afghanistan, and our friends and allies around the world," Gates said in a statement.

"Going forward, we must pursue this mission with a unity of purpose. Our troops and coalition partners are making extraordinary sacrifices on behalf of our security, and our singular focus must be on supporting them, and succeeding in Afghanistan without such distractions."