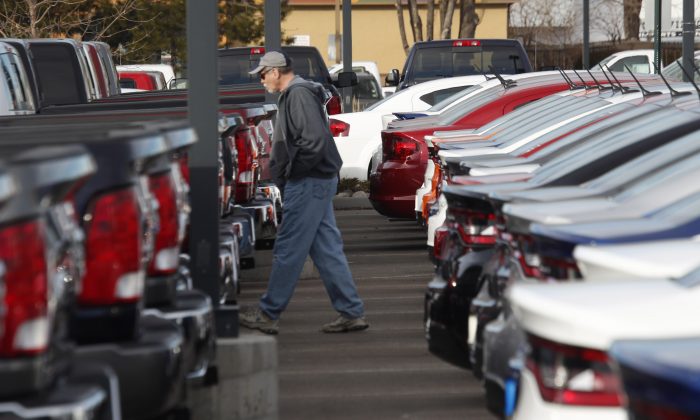 In this Sunday, Jan. 20, 2013, file photo, a buyer moves between rows of Ram pickup trucks and Dart sedans at a Dodge dealership in Littleton, Colo. Chrysler says its U.S. sales rose 8 percent in January 2014, as it posted strong growth despite the frigid weather that gripped much of the nation. (AP Photo/David Zalubowski, File)
AMERICA

General Motors, Ford to Suspend US Operations Over Pandemic

General Motors and Ford both confirmed on Wednesday that it will initiate the suspension of all manufacturing operations in the United States, Mexico, and Canada over market conditions triggered by the ongoing pandemic.

GM said it would deep clean facilities and attempt to protect its workers from potentially contracting the CCP virus, adding that the suspension of manufacturing at factories will last until at least March 30.

“GM and the UAW have always put the health and safety of the people entering GM plants first, and we have agreed to a systematic, orderly suspension of production to aid in fighting COVID-19/coronavirus,” said GM Chairman and CEO Mary Barra in a statement.

“We have been taking extraordinary precautions around the world to keep our plant environments safe and recent developments in North America make it clear this is the right thing to do now,” she said.

“We’re continuing to work closely with union leaders, especially the United Auto Workers, to find ways to help keep our workforce healthy and safe—even as we look at solutions for continuing to provide the vehicles customers really want and need,” Kumar Galhotra, Ford’s president of North America, said in a news release. “In these unprecedented times, we’re exploring unique and creative solutions to support our workforce, customers, dealers, suppliers and communities.”

According to local news reports, cases have been confirmed at a Fiat Chrysler assembly plant in Sterling Heights, Michigan, and another case was reported at Ford’s Michigan Assembly Plant in Wayne.

“UAW members, their families and our communities will benefit from today’s announcement with the certainty that we are doing all that we can to protect our health and safety during this pandemic,” said UAW President Rory Gamble in a statement. “This will give us time to review best practices and to prevent the spread of this disease. We appreciate General Motors’ actions today and will continue to work with them on health and safety plans to be implemented when we resume production.”

The move came as President Donald Trump moved on Wednesday to accelerate production of desperately needed medical equipment to battle the coronavirus pandemic and said an estimate that U.S. unemployment could conceivably reach 20 percent was a worst-case scenario.

“We’re going to defeat the invisible enemy,” said Trump, who said the unfolding crisis had basically made him a “war-time president.”

Trump said he would invoke another law that would allow U.S. authorities to turn back migrants seeking to cross the southern border of the United States illegally. The border will not be closed, he said.

“No, we’re not going to close it, but we are invoking a certain provision that will allow us great latitude as to what we do,” he said.