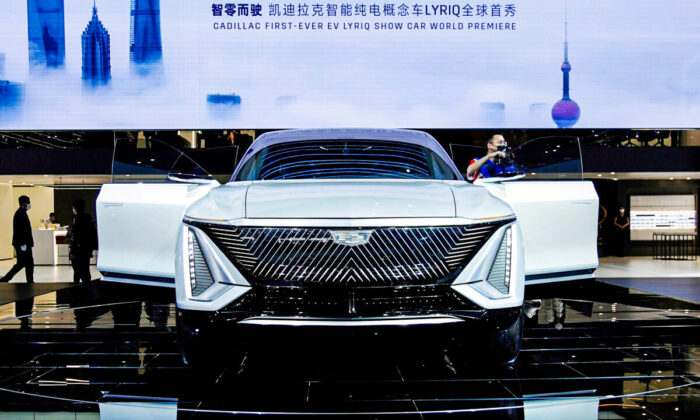 A Cadillac Lyriq electric vehicle (EV) under General Motors is seen during its world premiere on a media day for the Auto Shanghai show in Shanghai, China on April 19, 2021. (Aly Song/Reuters)
Companies

General Motors has announced two separate deals on Thursday under which the company will develop a domestic supply chain based in the United States for sourcing rare earth magnets, alloys, and materials for its Ultium platform electric vehicles.

Indicating a move away from dependence on China, the world’s largest electric vehicle (EV) market, General Motors will be partnering with MP Materials and Vacuumschmelze (VAC) to supply the critical components that will enable the automaker to fulfill its milestone of selling more than 1 million EVs globally by 2025.

Despite the name, rare earth is a group of relatively abundant 17 elements that are usually found within other minerals. They are called “rare” because it is uncommon to find the elements in their pure form. This also makes them costly to mine.

After processing, rare earth metals are used to make magnets, which are considered to be the heart of an EV motor. The magnet transforms electricity into motion through generating torque, thereby, powering the electric motor.

Neodymium is one of the 17 elements, and the neodymium permanent magnet (NdFeB), made from an alloy of the element combined with iron and boron, is the most widely used rare earth magnet. Like other rare earth metals, neodymium mining and processing is almost entirely done in China.

As there are virtually no domestic-based sintered NdFeB magnets produced today, U.S. lawmakers are urging auto manufacturers to develop new supply chains that will operate independently from the whims of the communist-controlled nation. Through the recent partnerships, GM seeks to bring back rare earth processing and establish a localized supply chain that can function on a commercial level.

“The more we can recover natural resources for batteries and EVs from North America, process them here and manufacture them … the more value we can create,” Shilpan Amin, GM vice president of global purchasing and supply chain, said on a call with investors, reported Reuters. “Our strategy is to control our own destiny.”

MP Materials owns and operates the only active rare earth production site in America. Located in Mountain Pass, California, the site will provide the materials which will be manufactured into magnets at the company’s soon-to-be-built facility in Fort Worth, Texas.

The California site will also build processing equipment, as MP currently depends on China for processing the metals. Once production begins in 2023, the Texas neodymium-iron-boron (NdFeB) magnet facility will supply enough magnets for GM to build half-a-million EV motors.

As part of the deal, MP Materials will build a so-called neodymium-iron-boron (NdFeB) magnet facility in Texas that will supply enough magnets for GM to build 500,000 EV motors. GM said it does not plan to take a stake in the Texas facility, which should open by 2023.

“We are proud to welcome GM as the foundational automotive customer for our new magnetics facility and join forces with a company fully aligned with our vision to reinvigorate the American manufacturing spirit,” said MP Materials Chairman and CEO James Litinsky.

However, a partially state-owned Chinese company, Shenghe Resources Holding Co. Ltd, has been found to be the holder of 8 percent of MP Materials’ shares. Based in Las Vegas, MP is majority-owned to 51.8 percent by hedge funds JHL Capital Group and QVT Financial LP. This has aroused suspicion in Washington.

VAC, based in Germany, is the biggest producer of permanent magnets in the western hemisphere and, under the new agreement, will build a plant in the United States for manufacturing magnets for GM’s Ultium-powered EV fleet. Slated to begin production in 2024, the location of the plant has not been announced, as well as, from where the plant intends to source its rare earths. Terms of the deals are still being finalized.

“We are thrilled to join forces with GM on this journey into an increasingly electrified world, leveraging sustainable clean energy solutions … VAC’s deep magnetic materials knowledge and extensive e-mobility technology expertise, in partnership with GM, will enable a cleaner global future for our communities,” said Dr. Erik Eschen, CEO of VAC.

GM was once a world leader in the rare earth magnet industry but had sold its patents to a consortium that included Chinese partners back in 1995. As the company is currently working on building the supply chain for the American market, it is also building one for China. The Chinese project is bigger in scale in terms of vehicle sales.