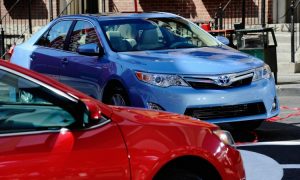 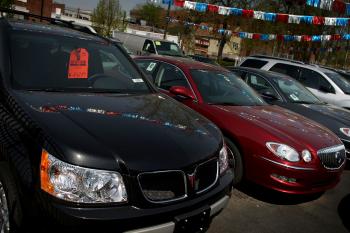 Pontiac cars are displayed at a a General Motors dealership on April 27, 2009 in the Queens borough of New York City. GM has announced that it will be to cutting 21,000 Jobs and will eliminate the Pontiac brand. (Spencer Platt/Getty Images)
Business & Economy

Ram Srinivasan
View profile
Follow
biggersmaller
Print
Big Three automaker General Motors Corp. posted a quarterly loss of $6 billion in the first quarter of 2009, as nervous consumers shifted away from the ailing automaker to other competitors.

The loss of $6 billion easily overshadows the $3.3 billion loss that the automaker had incurred a year earlier, and puts pressure on the automaker to speed up its viability plan.

General Motors' viability plan, which is to be presented in June to the Barack Obama administration, is being seen as a touchstone for the company's future, and will determine whether it will have to file for Chapter 11 bankruptcy like rival Chrysler did last week.

Sales for GM had halved over the same period last year, plunging from $42.4 billion to $22.4 billion, as speculation about the company's bankruptcy sent potential buyers to other carmakers. In North America, which represents half of GM's market, its sales fell from $24.5 billion to $12.3 billion.

General Motors has been shutting down factories across the country and cutting production by around 40 percent. It has also sought to cut costs through other means, such as shutting down its Pontiac brand and trying to find a buyer for its Hummer and Volvo units.

Ford Motor Co., meanwhile, reported better-than-expected results for its first quarter. It posted a $1.4 billion loss, but the loss was much lower than analysts had expected.