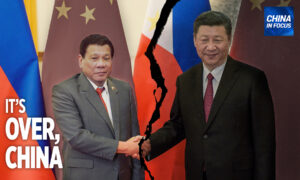 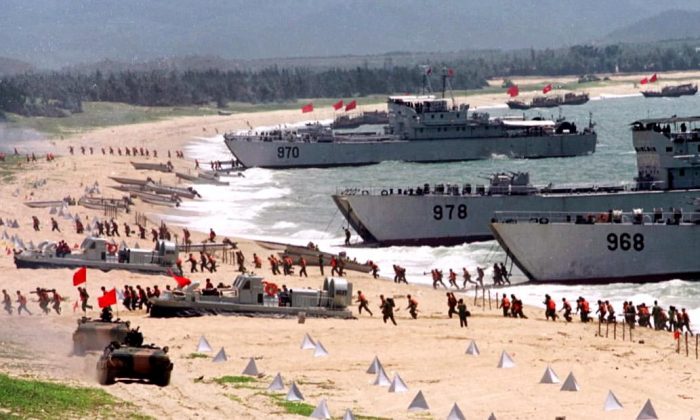 People's Liberation Army (PLA) storm ashore from landing crafts in an exercise on the mainland coast close to Taiwan on Sept. 10, 1999. (STR/AFP/Getty Images)
Thinking About China

Last week the Chairman of the Joint Chiefs of Staff, General Mark Milley, testified in the U.S. Senate that China has “a ways to go” before it can take Taiwan by military force. In other words, the People’s Liberation Army (PLA) isn’t capable of it yet.

The two Generals appear less worried than two top Navy admirals who testified before Congress several months ago. Outgoing USINDOPACOM commander, Admiral Philip Davidson warned of a Chinese invasion of Taiwan by 2027. His successor, Admiral John Aquilino said it could happen “much sooner.”

Analysts differ on whether the PLA is now capable of launching a successful assault on Taiwan. Some say it can and some say it can’t.

Skeptics point to a lack of ‘lift’ (ships needed to get across the Taiwan Strait); inadequate ‘joint’ capability (the ability to combine PLA air, sea, and ground forces—essential for this kind of operation); and inadequate logistics capabilities.

While Xi Jinping prefers to bully Taiwan into submission, I think the PLA has the capability to conduct an assault on Taiwan—and think it will succeed.

It has 50+ purpose-built amphibious ships. Some are older models but these work fine. The Chinese also have hundreds of commercial vessels, container and RORO (roll-on/roll-off) ships, and thousands of ferries and barges. If the objective is to get troops and hardware across the strait, then these will suffice. There is enough ‘lift’ to land three Army divisions and a Marine brigade in an initial assault, according to some analysts. And there is no shortage of military and civilian aircraft to drop airborne troops.

As for ‘joint’ capabilities? That’s a challenge for all militaries, but the PLA has identified this requirement and it trains to improve joint capabilities. And, Taiwan has been the PLA’s main objective for decades, so it’s gotten plenty of funding, attention, planning, procurement, and practice—to include amphibious assaults and necessary air, naval, and fire support coordination.

Logistics? Maybe not up to U.S. military standards, but maybe good enough.

Keep in mind that an assault will take place in the context of missile barrages, cyber attacks, electronic warfare, and naval and air forces swarming the island and its environs. Also, there is a “5th column” of saboteurs and agents in Taiwan that China has had 60 years to put in place.

Also possible are coordinated attacks by China’s proxies in other theaters to distract and divert the focus and forces of Taiwan’s allies.

Underestimate the Chinese and you’ll learn a hard lesson—as the U.S. military and intelligence and business communities should know by now.

Thus, I would err on the side of caution.

But there are other aspects of General Milley’s testimony that raise issues besides whether or not the PLA is ready to attack Taiwan.

The General didn’t seem all that concerned about Chinese capabilities, only that someday they might get a “no kidding” capability to attack Taiwan.

Follow Chinese military matters for a number of years and one often detects a certain condescension from the U.S. side—sort of a sense that the Chinese will never be our equals. The U.S. Marine Corps has been guilty of this. The argument being that amphibious operations are the most complex military operations known to man (and therefore the Chinese will never do them as well as us—or become our equals).

We heard the same thing about PLA aircraft carrier and submarine operations.

Indeed, in 2017 then-PACOM commander, Admiral Harry Harris likened comparing Chinese submarines and U.S. Navy submarines to “comparing a Model T with a Corvette.” A glib line, no doubt, but dangerously dismissive. When the Chinese put their mind to do something, just give them time and they probably will figure it out.

General Milley stated that “it is a core, C-O-R-E national interest of China to unite Taiwan.”

This is frustrating. He should have said ‘annexed’ or ‘seized’ rather than ‘unite’—that has a nuance of fairly arrived at mutual agreement. But even more, the General ought to have stated that the United States has its own core interest in not letting 24 million free people—who meet all the legal requirements of a country and have been independent for over 70 years—be annexed and enslaved by an expansionist, fascist, totalitarian dictatorship.

Let this happen and America is finished in Asia—and will feel the harmful effects worldwide. Talk about a “core” interest.

Is there some reason General Milley couldn’t have said this?

If the United States always walks on eggshells and cringes whenever Beijing declares something a core interest, then Beijing will always have the advantage. And it will reckon that if it pushes hard enough at the right time the Americans will back down. After all, it’s China’s “core interest”–so let them have it and they will be satisfied—as too many American ‘China hands’ will advise.

General Milley made another verbal faux pas with regards to China ‘uniting’ with Taiwan: “… the internal politics of China are up to China, as long as whatever’s done is done peacefully and doesn’t destabilize the region or the world.”

So what China is doing to Taiwan is just “internal politics?”

Hopefully Milley didn’t mean this—and was just poorly served by his staff. This muddled language appears to take Beijing’s side—and they’ve been telling the Americans to stay out of China’s domestic affairs for decades.

The Chinese Communist Party leaders just might have heard America’s senior military officer say: It’s your business. It’s for you Chinese to work out. And if you want to intimidate, isolate, threaten, blockade, ‘salami slice,’ strangle, and subvert Taiwan—well that’s okay. Just muffle the screams if you will and don’t let us see the blood.

What on earth is Milley’s staff telling him?

All in all, this was a depressing performance by America’s two top military leaders. And given the difference of views in Washington and Honolulu, one wonders if they even talk to each other.

Some advice for the Pentagon:

First, don’t underestimate the Chinese. Have you ever heard a Korean War veteran who was near the Yalu River or the Chosin Reservoir in 1950 say he’d like to do it again? Second, remember that the United States has its own core interests—and preserving Taiwan’s freedom (and America’s reputation) is one of them. Third, watch your language. The Chinese are listening carefully. Dean Acheson could tell you that.