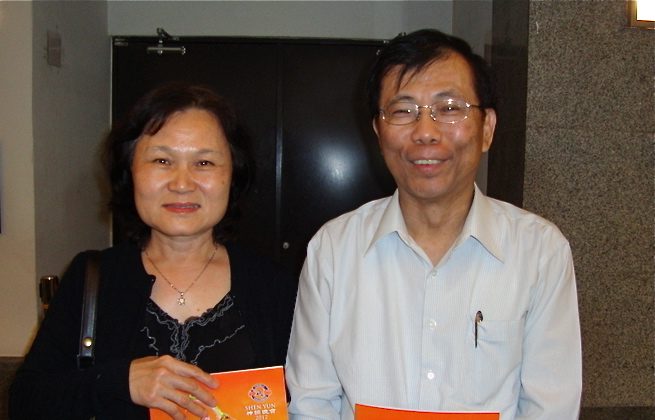 Bin-An Wu and his wife are first-time attendees at a Shen Yun performance at the Chiayi Performing Arts Center, praising the performance for its excitement and surprises. (Shang-Hai Cai/The Epoch Times)
News

CHIAYI, Taiwan—Shen Yun Performing Arts New York Company has made a name for itself at Alishan, a national scenic area at Chiayi, Taiwan. With an astounding sold-out record for six consecutive years, tickets were hard to come by two weeks prior to the first performance at the Chiayi Performing Arts Center. On the evening of April 4, Bin-An Wu, president of Potz General Hospital, his wife and eight friends, witnessed the cultural extravaganza of Shen Yun. They praised the performance for its excitement and surprises.

With a joyful spirit, Mr. Wu said: “This is my first exposure [to Shen Yun]. It was great. I was in awe. I could have never imagined such high-tech animated backdrops, and on top of that, it had successfully integrated with traditional Chinese culture, classics and arts.

“To my astonishment, I did not realize there was an orchestra pit until the very end. It was a live orchestra with combination of Western and classical Chinese instruments. It was truly a musical extravaganza.”

Mr. Wu said he was lost in wonderment with the overwhelming feeling from the first program An Era Begins. And to top it off, the last program Before Disaster, The Divine is Rescuing took the wonderment to an even higher level Mr. Wu said. The entire production was done with professionalism, with diligence and with a lot of attention to detail, he added.

Mr. Wu was also impressed by the theme of the performance. He said: “Good will eventually defeat evil. All the programs in the performance could make every one of us connect with our inner goodness, allowing us to make better judgments in the face of right and wrong. … The performance was positive, extremely positive for the entire society.”

Mrs. Wu, likewise, also gave her positive feedback about the performance, saying: “From the high-tech animated backdrops, the exquisite classical Chinese dance, the live orchestra, the beautiful costumes, to the elegant, vibrant colors, everything was so beautiful, full of excitement and surprises.”