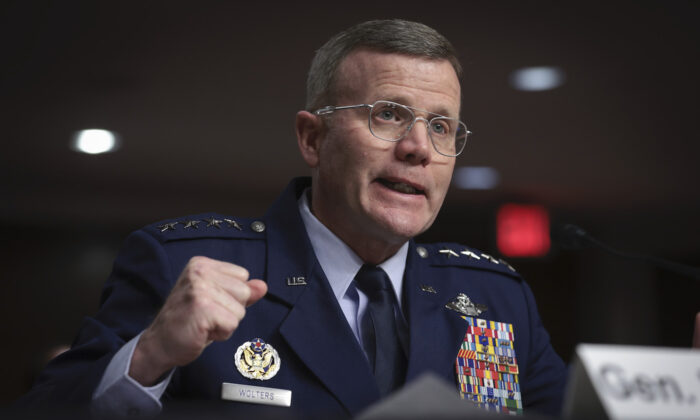 General Clarifies US Not ‘Currently Training’ Ukrainian Forces in Poland

“I do not believe that we are in the process of currently training military forces from Ukraine in Poland,” Wolters said on Tuesday.

“There are liaisons that are there,” Wolters added. “They’re being given advice, and that’s different than I think (what) you’re referring to with respect to training.”

His remarks come after Biden on Monday told reporters that while in Poland last week, he had been talking to U.S. troops who were helping “train” Ukrainian forces in Poland, something that U.S. officials had previously ruled out.

“I was referring to being with, and talking with, the Ukrainian troops that are in Poland,” Biden said when pressed again on the issue.

The Pentagon on Tuesday also clarified that U.S. troops in Poland were “liaising” with Ukrainian forces as they hand over weapons to them.

“It’s not training in the classic sense that many people think of training. I would just say it’s liaising,” Pentagon spokesman John Kirby told reporters.

Kirby did not provide details on what exactly the interactions entail or how long they usually lasted. It was not immediately clear whether the distinction between liaising and training had greater significance, as the United States tries to limit any direct military involvement in the war.

The United States and countries from around Europe have largely limited their military support to intelligence sharing and heavy supplies of weaponry to Ukrainian forces, including anti-aircraft and anti-tank systems.

The United States withdrew its military trainers of Ukrainian forces from western Ukraine before Russia’s invasion, and the training site where they had previously operated near the Ukrainian city of Lviv was subsequently bombed by Russian air-launched cruise missiles earlier this month.

On March 22, White House National Security Advisor Jake Sullivan said that the United States does not “have U.S. troops currently training Ukrainians. We do not have U.S. troops on the territory of Ukraine.”

The Epoch Times contacted the Biden administration for additional comment but didn’t receive a response in time for publication.