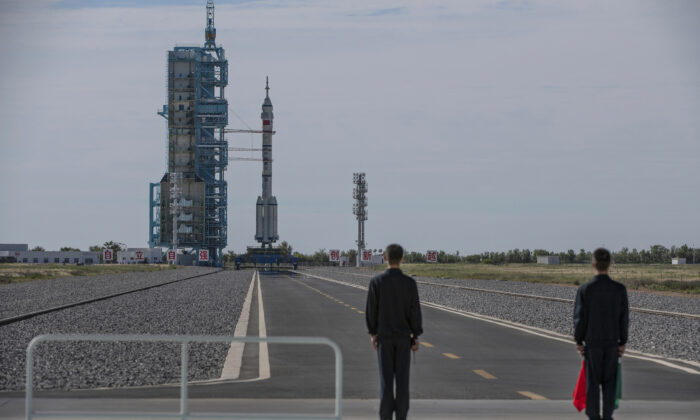 Workers stand near the manned Shenzhou-12 spacecraft from China's Manned Space Agency onboard the Long March-2F rocket before launch with three Chinese astronauts onboard at the Jiuquan Satellite Launch Center on June 17, 2021 in Jiuquan, Gansu province, China.(Kevin Frayer/Getty Images)
US

General: China Trying to Become the Most Dominant Force in Space

A Space Force general warned that China’s communist regime might become the most dominant force in space if the United States doesn’t accelerate its pace to field critical new technologies in the warfighting domain.

Vice chief of Space Operations Gen. David Thompson told the Washington Times this week that China has already developed a “tremendous and exquisite capability to look from space to see, hear, track and defend.”

Most important, Beijing is approaching the ability to field new space systems in about half the time it takes the United States to do the same, Thompson suggested.

Three astronauts, including one female astronaut, are supposed to stay in the space station for six months.

Between June 17 and Sept. 17, another three Chinese astronauts stayed in the space station for three months.

As early as 2007, China launched a ballistic missile, that destroyed a non-operational Chinese weather satellite.

In September, Gen. John “Jay” Raymond, chief of Space Operations, said China has deployed satellites with a robotic arm that could be used to “grab” other satellites.

The Financial Times reported that China tested its hypersonic missile recently. U.S. disarmament ambassador Robert Wood called it a technology “we just don’t know how we can defend.”

“It’s very critical that we accelerate, not just to keep pace, but to stay ahead of the threat of the capabilities the Chinese are provided,” Thompson said.

The good thing is, Thompson pointed out, that the Space Force has “put some processes and organizations in place to do that, and they’re demonstrating, early-on, the ability to do so.”

The next conflict between China’s regime and the United States may start in space, Thompson said.

“We absolutely believe that the Chinese thinking would be if it’s coming to crisis and conflict, they’re going to start this conflict in space,” the general said.

Last month, some Democrats in Congress introduced a bill called the “No Militarization of Space Act,” in an attempt to abolish the Space Force, which was established under the Trump administration.

“Since its creation under the former Trump administration, the Space Force has threatened longstanding peace and flagrantly wasted billions of taxpayer dollars,” Rep. Jared Huffman (D-Calif.), the bill’s sponsor, said in a statement.