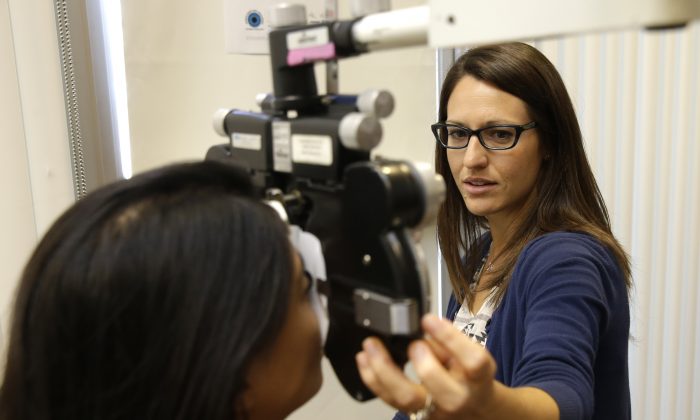 Gene Therapy Offers Cure for Congenital Blindness and So Much More

In 1907, the first antibiotic was synthesized. It was able to treat syphilis without harming the the human body and was heralded as a “magic bullet” by its inventor. Nowadays, medicine without antibiotics is nigh unthinkable.

More than a century later, the medical community stands on the precipice of a similarly tectonic breakthrough with the discovery of gene therapy, which offers the hope of curing numerous genetic disorders.

A plethora of birth defects stems from the mutation of a single gene that shortchanges the body of some function or another. Gene therapy works by splicing in the working copies of that gene into a patient’s chromosomes.

The genetic editing is done by modified viruses, stripped out their ability to multiply in the host’s body, carrying copies of the working gene that are injected into the tissues of the affected organ, where they work to fix replace the mutated gene.

The groundworks for gene therapy was laid in the late 1990s, when advances in DNA sequencing allowed for the discovery of the exact genetic cause of many congenital disorders. So far, the mutations responsible for 35 eye-related genetic disorders have been discovered.

“We’re just at the beginning of this,” said Mark Pennesi, a clinical scientist at Oregon Health and Science University. “At least 18 or 19 genes that have been associated with Leber’s congenital amaurosi (LCA), and there are probably a few more to be discovered.”

LCA is a mono-genetic disorder that slowly robs the afflicted of their vision; the vision loss is caused by a gradual deterioration of the rods and cones, the cells in back of the eyes that detect light. Only a single mutation is necessary to trigger the disease, unlike poly-genetic disorders, the occurrence of which are correlated with multiple mutations.

The disease gained prominence in the medical community in 2008 after experiments documented a successful treatment of the disorder with gene therapy that targets the RPE65 mutation.

A disproportionate amount of research has been conducted for finding gene therapy solutions to eye-related disorders relative to other congenital disease because the nature of the eye — transparent, observable — lends the organ to careful examination and scrutiny during the testing of new treatments. Eyes are also less likely to reject the modified viruses than most other organs.

That said, Glybera, the first gene therapy treatment approved for the market in Europe, treats lipoprotein lipase deficiency, an extreme rare disorder where fat could accumulate and block blood-flow.

In the United States, a number of gene therapy treatments for LCA are already in phase three of clinical testing. Many of the subjects in the trials have reported substantial vision restoration, many of them children who were able to see for the first time.

However, a study published in May sparked alarm after it shows that although some patients were able recover their vision temporarily, the effects of the therapy eventually “wore off” after a some years and deterioration of the photoreceptors continued.

“That finding is probably a little controversial,” Pennesi said. “The finds were of a subset of some of the patients that were treated, there’s a variety of reasons why the effect could wear off. … There are other groups out there that have their treatments last longer.”

Even if ocular gene therapy proves to be effective, there will probably be limits on how much vision restoration it could provide to adults who have been blind since childhood, many of whom haven’t formed the necessary connections in the neocortex responsible for vision.

“It’s not so much a problem with an adult who loses vision. The brain is fairly hard wired with that capacity,” Pennesi said. “We do sometimes worry about children with severe vision loss, will the brain be able to rewire itself.”

As the genetic catalogue for genetic disorders grows, the number of congenital disorders that appear incurable will continue to shrink. Theoretically, gene therapy treatments could expand beyond severe vision loss to tackle problems like colorblindness, and more, although those might have to wait until gene therapy becomes a safer practice.

“The question is, would you want to treat it? Most people who are colorblind do OK in life,” Pennesi said. ” It’s surgery — you’re putting a foreign particle in the eye.”