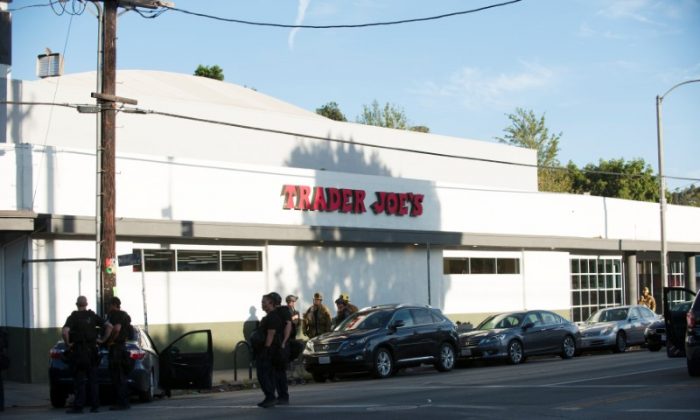 Police respond to a hostage situation at a Trader Joe's store in Los Angeles, Calif., on July 21, 2018. (REUTERS/Andrew Cullen)
US News

A 28-year-old man was arrested on suspicion of murder after shooting and killing a Trader Joe’s employee in Los Angeles.

Atkins was taken into custody at around 6:30 p.m. on Saturday, some two hours after he reportedly ran inside a Trader Joe’s in the Silver Lake neighborhood and allegedly held people hostage, according to the report.

Hours before, police said that he shot his grandmother seven times and shot another woman. Then, he led police on a chase until he crashed into a light post near the Trader Joe’s. Atkins then allegedly exchanged fire with police before going into the store.

In the incident, dozens of employees and shoppers were trapped inside. Atkins allowed some to leave, and other people sneaked out.

“Seven of us were hiding in the back behind the bread,” Cyrani Ackerman told the LA Times. “There was a lot of shots fired.”

Silver Lake Trader Joe's Standoff That Left Woman Dead, Others Injured https://t.co/bApKglv3Gx Gene Evin Atkins was armed when he ran into the store 3 p.m. Saturday following a pursuit that began 1 1/2 hr before in South L.A., where he shot his grandmother & another woman

Melyda Corado, 27, was identified by a man who said she was his sister. “I’m sad to say she didn’t make it. My baby sister. My world,” he wrote on Twitter.

I’m sad to say she didn’t make it. My baby sister. My world. I appreciate the retweets and the love. Please respect my family’s privacy as we are still coming to terms with this. #TraderJoes #SilverLake

At around 6:30 p.m., Atkins agreed to surrender and handcuffed himself before walking out the door. He was taken into custody.

Sean Gerace, an employee, was hailed as a hero for helping employees escape the standoff. “I grabbed an emergency ladder, barricaded the hallway, grabbed a weapon, put the ladder out the window, and just tried to get the attention of a SWAT officer,” Gerace recalled, according to Fox News.

Wow! Bravo to this #TraderJoes crew member Sean. He heard the shots, barricaded himself and some co-workers upstairs, grabbed the window ladder and helped many of his co-workers get out. You can see him in the picture below. #SilverLake @NBCLA pic.twitter.com/2co6JqVhCY

Lynne Westafer, a Trader Joe’s employee, told KCAL that she didn’t know the gunman shot his grandmother before the hostage situation unfolded. “He said he would start killing us if he didn’t get to talk to his granny,” Westafer said. “And he would start counting down from five—and that was terrifying.”

Atkins is being held on $2 million bail, officials said on Sunday.