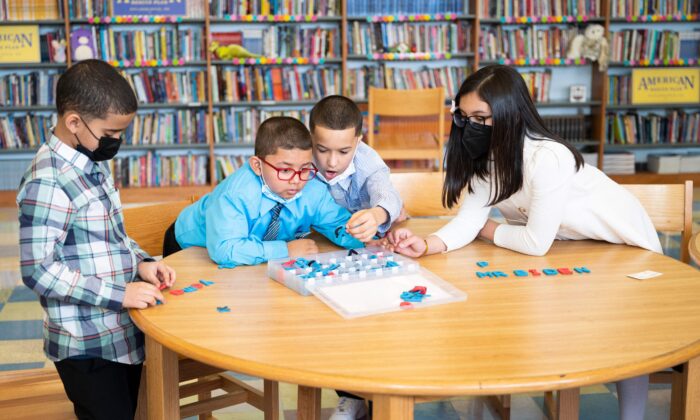 The concept and content detailed on the Pennsylvania Department of Education (PDE) website on gender identity have raised concerns among some Pennsylvania education administrators.

PDE’s gender identity webpage includes a curriculum guide for teachers to hold a “gender neutral day” in their classrooms in grades 3-12. The guide states that as part of the activity, students should pick two to three ways to reject gender stereotypes for the day, and teachers should make a specific commitment to challenge gender norms in the classroom.

“I know child development, and I know some brain development. And I know that kids are not ready to handle this information,” Jenifer MacFarland, the PA State Lead for No Left Turn in Education, told the Epoch Times on Aug. 11. The movement’s goal is to Restore parental function in public education and elevate the family as a core teaching unit of society.

MacFarland has worked as a teacher and administrator in traditional public and public charter schools for 24 years. She was the Founding Academy Director of Renaissance Academy in Phoenixville, PA, and finally became the CEO. MacFarland also served as Elementary Director of Avon Grove Charter School before working as an Educational Consultant with Edison Schools.

“So, I think I can honestly say that I understand kids. And I know what best practices and education are,” said MacFarland. “I’ve worked with kids from three to 18 years old.”

She questions whether the brains of young children and adolescents are mature enough to accept the concepts of gender identity listed on the PDE website.

“And that part of the brain is not developed until you’re 25. So, we are giving these concepts to kids, this gender theory, discussing your pronouns, asking if you like boys, or girls, when at ages that are completely inappropriate because the child literally, physiologically, emotionally, cannot process this information.”

MacFarland gave a real example: “I know a child who came home from school at nine years old and told her parents that she was pansexual. Because the teacher asked if you like boys and girls, and because she liked both boys and girls, she must be pansexual.”

“So, we are doing nothing but harm to these kids. And we’re doing it at an age where they’re extremely vulnerable, early elementary, fourth grade, they’re not even thinking about these things,” she said.

MacFarland believes that imbuing the concept of gender identity only adds to a young child’s burden and confusion.

“And so, we’re now throwing on to them some concepts they can’t even begin to understand. That throws them into more confusion. So, is gender theory right for introducing K through eight or even K through 12? No, it’s not, it’s not developmentally appropriate,” MacFarland said.

PDE says it promotes gender identity programs to ensure “equity” and fairness and to protect children from bullying. MacFarland states that she also hates bullying, and as an administrator, she will take very reasoned and swift actions against kids who are bullied in school: “They have to understand that it’s not acceptable. It’s not the way adults behave.”

She believes the golden rule instead is much more potent than dividing people up according to race, religion, creed, and nationality.

“When we all have our challenges, and we all have our issues, and no one is greater than the other, we have to understand that we need to treat people the way we want to be treated, and that’s the old golden rule,” she said.

“Make kids understand that they’re just human beings like you, and you don’t have the right to say these horrible things to another human being.”

MacFarland realizes that most parents are not aware of the problems with the PDE website.

But when they become aware, she mentioned there are usually two reactions. One is, “They’re appalled. They can’t believe it. What has happened to public schools? I want to pull my kid out.”

The other reaction is, “You’re a bigot, you’re homophobic, we need to support our children in these decisions that they’re going to be making in their lives.”

“That is a fallacy,” MacFarland said. “That is completely contrary to brain development and child development. These people don’t know what they’re saying. They’re saying it because they believe the narrative that if your child thinks they are pansexual, or trans, or whatever it is that you need to believe your child. But a child can’t make that decision. They physically and emotionally cannot. Developmentally they can’t do it.”

McFarlane noted that in a statistical survey study called the Trevor Project, researchers found that it was sometimes difficult to collect all the data on kids after they were in their 20s. They followed these children for so long and then lost them in their 20s.

But the researchers said 75 to 90 percent of the kids identified as transgender or had other gender issues. By the time they were in their 20s, they were back to being heterosexual.

McFarlane said that more Pennsylvania parents should be aware of what is being put up on the PDE website. “I would also encourage all those people because we are in the majority to stand up for their kids and our future as a country,” she said.