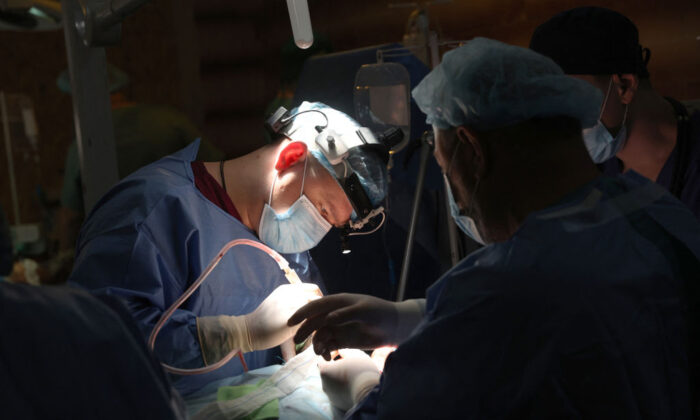 A Sydney woman has sued her psychiatrist for professional negligence when giving approval for gender surgeries in Sydney, Australia on Aug. 24, 2022. (Photo by Anatolii Stepanov / AFP)
Australia

Young people who believe they are of the opposite gender are being encouraged to think gender-reassignment surgeries are the best course of action, an Australian lawyer has said.

The comment follows recent media reports about a Sydney woman who sued her psychiatrist for professional negligence when allowing her to undergo gender surgeries in her early 20s after only one meeting.

Anna Kerr, the principal solicitor of Feminist Legal Clinic, a community legal service that provides community legal education and law reform work to advance the human rights of women and girls, is one of the lawyers involved in the case.

Speaking to The Epoch Times, Kerr said psychiatrists who take a gender-affirmative approach are “at risk of fast-tracking young people into taking hormones and having surgeries without having sufficiently explored comorbidities.”

Comorbidity describes the existence of more than one disease or condition at the same time.

This includes “underlying mental health conditions and histories of trauma that may be responsible for their distress,” she said.

“I think there needs to be a major reassessment of the gender-affirmative approach and that psychiatrists need to proceed with great caution in the meantime,” she noted.

Jay Langadinos, 31, who is suing experienced psychiatrist Patrick Toohey for professional negligence, was noted to have a social phobia when she sought gender transition.

According to the Sydney Morning Herald, Langadinos’ complicated home environment, feeling of being attracted to other girls in her mid-teens, and online influence led her to believe she was transgender. However, she said her unhappiness grew after undergoing gender-reassignment surgeries.

Langadinos, who now no longer identified as a male, noted that the medical procedure had led her to suffer from mental and physical injuries as a result of hormonal treatment and breast and womb removals, according to court fillings. This includes psychological dysfunctioning, infertility and ongoing need for medical treatment.

She argued in her court document that Toohey should have provided her with a further psychiatric evaluation.

Langadinos asked for advice from Kerr, who then referred her case to the legal firm Slater and Gordon.

Meanwhile, court filings show that Toohey said he had strongly recommended Langdinos to take further therapy due to her social phobia and have regular follow-ups, but she didn’t heed the advice. Toohey noted he was concerned that Langadinos “did not know how psychological factors could influence the outcome of gender transition.”

Despite the growing number of individuals, the majority of whom are young people, questioning their gender, there is currently a lack of data about such cases and about their condition following gender surgeries.

Kerr said such information is crucial.

“Any government inquiry must include reputable longitudinal studies to assess how individuals who have been subjected to these interventions are coping a few years down the track,” she told The Epoch Times.

The lawsuit follows an incident in the UK where London’s Tavistock clinic was shut down after an independent review found the clinic’s “unquestionable” gender-affirmative approach putting children at “considerable risk” of distress.

According to a 2021 exploratory cross-sectional study, the most popular reason for people to detransition is the realisation that their gender dysphoria was related to other issues, and health concerns and that transition didn’t help with their dysphoria.