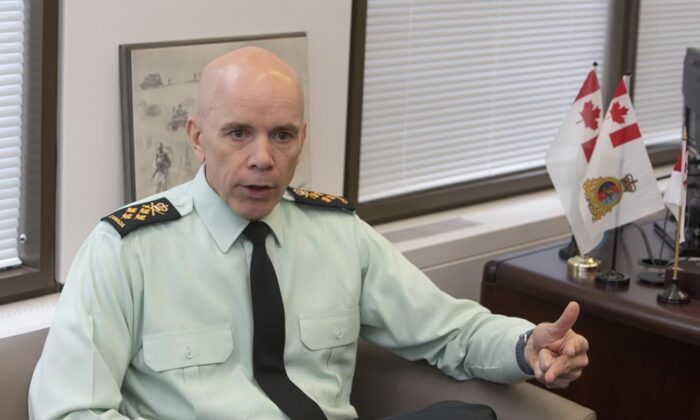 Chief Defence Staff General Wayne Eyre is shown in his office during an interview in Ottawa, Nov. 26, 2021. (The Canadian Press/Fred Chartrand)
Canada

OTTAWA—Canada’s newly minted chief of the defence staff says he felt he needed to speak up and remind senior military officers who they work for after his predecessor sent them a letter arguing to get back his job as Canada’s top military commander.

“When the senior leadership of the Armed Forces was engaged, I felt I had to jump in and remind them that we work for our duly elected civilian officials, who represent the will of the Canadian population,” Gen. Wayne Eyre told The Canadian Press in an interview on Friday.

The comments represent the first time Eyre has spoken publicly about Admiral Art McDonald’s controversial letter, which has been heavily criticized by the Liberal government and others since it was distributed to the top brass last month.

On Thursday, Prime Minister Justin Trudeau confirmed Eyre as permanent defence chief, nine months after he took over the position on an acting basis while military police investigated an allegation of sexual misconduct against McDonald.

At the time, Eyre responded with his own message describing McDonald’s letter as “shocking,” and reminded his officers they work for elected officials while the chief of the defence staff serves at the pleasure of the prime minister.

He reiterated that message Friday, saying: “That civil-military relationship needs to be reinforced because that’s the strength of a democracy. We just have to be absolutely clear that we know who we work for.”

Eyre otherwise would not comment on McDonald’s case, nor was he prepared to provide substantive details on how he plans to address the broader sexual misconduct crisis that has shaken Canada’s military over the past nine months.

However, he did promise new plans to support victims and change the military’s culture will be announced in the coming weeks, even as senior leaders eagerly await the results of retired Supreme Court justice Louise Arbour’s review of the problem.

The government has already accepted Arbour’s recommendation to transfer the investigation and prosecution of sexual assault cases and other criminal sexual behaviour to civilian authorities.

While the military has long resisted any external involvement in its affairs, Eyre on Friday signalled a fresh openness to including non-military experts and actors to address the current crisis that has eroded faith and trust in the leadership.

Some experts and advocates have been demanding the government strengthen the office of the military ombudsman or create an office of the inspector general, which would provide independent oversight and accountability over the Armed Forces.

Asked about these calls, Eyre said he would welcome the creation of what he described as an “independent complaints mechanism” for service members to voice concerns or issues without having to go through their chain of command.

“It’s been recommended numerous times, in fact going back to the Somalia inquiry,” he said. “So if that’s going to restore the confidence of all in the Canadian Armed Forces, well let’s bring it in.”

The current crisis has caused a great deal of upheaval across the Canadian Armed Forces, with a number of top officers currently under investigation or otherwise having to step aside because of past actions.

At the same time, the military has faced unprecedented demands over the past two years as it has conducted numerous missions abroad while helping provinces with the COVID-19 pandemic and a growing number of natural disasters.

That includes deploying troops to flood-ravaged British Columbia and Newfoundland in recent days. These increased demands have come at a time when recruitment has dropped significantly and the military is short several thousand troops.

“We are a fragile organization right now because of our numbers being down, because of the (operational) tempo, because of this crisis in misconduct,” he said.

“That being said, when the people of Canada-when our population-is at risk, that rapidly goes to the top of the priority list.”

Eyre added that the number of service members hanging up their uniforms has decreased during the pandemic, and that he has received no indication the recent push to change the military’s culture has led to an exodus of personnel.

“If individuals are leaving because they don’t like the direction we’re going,” he added, “well that’s OK too. Because I prefer quality over quantity, and that’s going to make us better in the long run.”