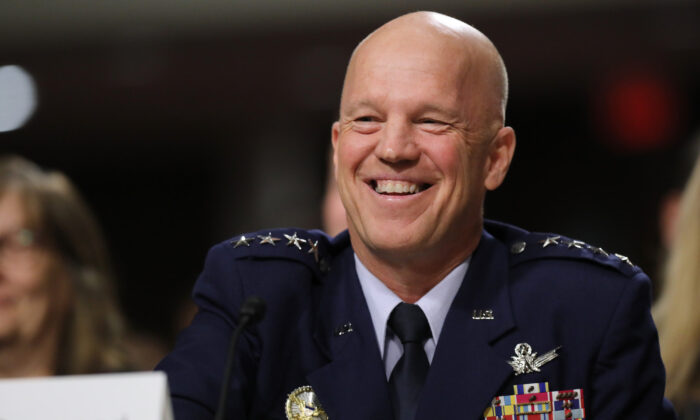 Gen. John “Jay” Raymond was formally sworn in as the first Chief of Space Operations at a White House ceremony led by Vice President Mike Pence, gaining a seat at the table with the other Joint Chiefs of Staff.

“This establishment is absolutely critical to our national security,” Gen. Raymond said Tuesday during brief remarks after taking a historical oath at Eisenhower Executive Office Building. “We have our marching orders, and we are moving out.”

Gen. Raymond was appointed as the Space Force’s first Chief on Dec. 20, 2019, when President Donald Trump signed into law the National Defense Authorization Act for Fiscal Year 2020, creating the Space Force as the sixth service branch of the U.S. armed forces. Before his appointment, the Air Force general led Space Command, a Colorado-headquartered combatant command responsible for fighting any potential battle in space. He has also been managing Air Force Space Command, which is now assigned to the newly established Space Force along with its 16,000 military and civilian personnel.

“The President and Congress have given us a great opportunity to build the force we need to respond to the challenges that we face in the space domain,” Raymond said. “Not only is this historical, but it is critical. This establishment is absolutely critical to our national security and that of our allies.”

Raymond emphasized the Space Force’s role of deterrence instead of warfighting. “We do not want a conflict to begin or extend in space. We want to deter that from happening,” he said. “Once built, the Space Force’s measure of success will be that our adversaries are deterred, and our joint and coalition partners will always have the space capabilities that our modern way of war and modern way of life depend on.”

Vice President Mike Pence Pence expressed confidence in Raymond’s leadership, saying there was little debate when it came to who should lead the branch.

“The first decision the president made after establishing the Space Force was deciding who should be its first leader,” said Pence. “He knew right away there was no one more qualified or prepared from a lifetime of service than Gen. Jay Raymond.”

Pence also highlighted the impressively long and rich military heritage of the Raymond family, which has contributed service members to the U.S. military for generations since the end of the Civil War.

“I just learned the depth of a tradition of military service in this extraordinary family,” said the vice president. “It is remarkable to think since 1865, the Raymond family has worn the uniform of the United States.” The West Point Academy has a detailed “Legacy Family” page (pdf) dedicated to the Raymonds on its website, showcasing their history of military service.