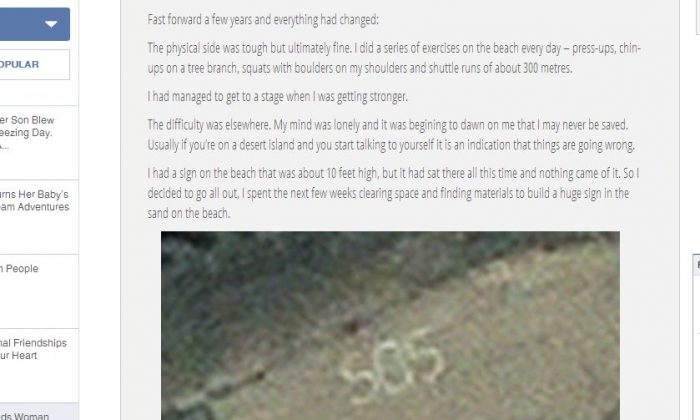 Gemma Sheridan, a name that was used in a viral fake article about Google Earth being used to find a woman on a deserted island, is a real person and said that her friends made up the story about her and posted it on a hoax news website. (Screenshot / NewsHound)
Tech

Gemma Sheridan, a name that was used in a viral fake article about Google Earth being used to find a woman on a deserted island, is a real person, and she said that her friends made up the story about her and posted it on a hoax news website.

The article–titled “Google Earth Finds Trapped Woman on Deserted Island For 7 Years”–was published on News-Hound.org, which publishes a good deal of fake news.

“I woke up 1 morning to the sound of a plane flying over me which was unusually low, I could not believe it, I thought it was a dream. I ran to the beach screaming and waving my arms like a lunatic, the plane flew over 2 or 3 more times and then dropped a small package,” the fake News-Hound article reads.

“Inside was a radio, fresh water, food and a small medical kit. I switched on the radio and heard the first human voice for years. We talked for what seemed like an eternity, then I asked the voice on the other end ‘How did you find me’ to which they replied ‘Some kid from Minnesota found your SOS sign on Google Earth,’” it continues.

According to hoax-debunking site Snopes, the “SOS” image used in the article was taken in 2010 during unrest in Kyrgyzstan.

Sheridan said on Saturday that News-Hound.org is run by some of her friends. She said they made the “Google Earth” story up about her as a joke.

“Hi Howard My friend owns newshound so I think they may have made this up about me as a joke haha,” Sheridan Tweeted.

Regarding the article, hoax-debunking site Snopes says: “First of all, the NewsHound web site is not a news site at all, and it has, in place of news, reproduced a number of other hoaxes and spoofs as if they were real news, such as long-debunked stories about a Chinese man suing his wife over giving birth to an ugly baby, Apple paying Microsoft [sic] a $1 billion debt all in nickels, and a planetary alignment causing gravity on Earth to be negated for five minutes.”

And the image, the website says, of the “SOS message supposedly created on a beach by the stranded woman is actually a cropped and enlarged version of a picture published by Amnesty International back in 2010 to accompany an article about destructive violence in southern Kyrgyzstan and was clearly (in its original context) not snapped on a deserted island.”