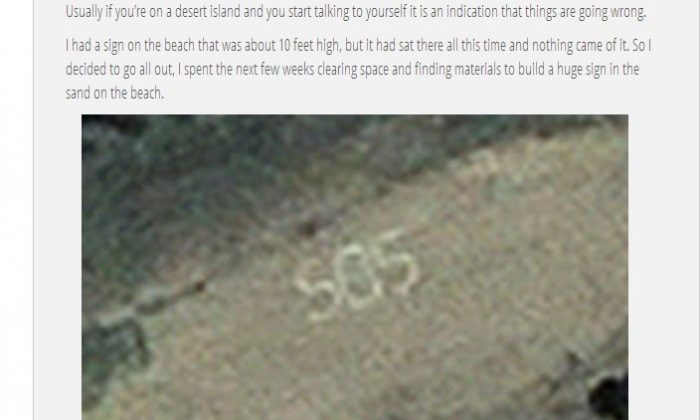 A viral article is claiming a woman named Gemma Sheridan was stranded on a deserted island for seven years before she was found via Google Earth after she put up an “SOS sign.” However, the article is completely fake, and viral articles like this one can make possibly tens of thousands of dollars for those who create them.

“I had been on water rations for the last 2 weeks, so finding water was the first priority. There where no pools of fresh water, so I had to rig up a contraption that drew the water away from the rock and I managed to get one drop every 50 seconds. That was my only source of water, so it was coconuts until it rained. Not the best start,” reads the article, published on News-Hound.org, which has a number of fake news reports on its site.

It adds: “Inside was a radio, fresh water, food and a small medical kit. I switched on the radio and heard the first human voice for years. We talked for what seemed like an eternity, then I asked the voice on the other end ‘How did you find me’ to which they replied ‘Some kid from Minnesota found your SOS sign on Google Earth’ I didnt even know what Google Earth was, but I’m eternally in their debt now.”

The “SOS” image used in the article was actually taken in Kyrgyzstan during widespread unrest in 2010.

There’s also no credible or mainstream media reports about a woman named Gemma Sheridan getting rescued.

“The report is untrue. The event described never took place. The image is a cropped version of a satellite picture showing an SOS sign created by people caught up in a violent ethnic conflict at the city of Osh, Kyrgyzstan in 2010. The uncropped image shows buildings and roadways and clearly does not depict a deserted island. The report comes courtesy of NewsHound, a website that specializes in perpetrating false and misleading articles disguised as news,” says Hoax-Slayer.

But fake reports–including celebrity death hoaxes–can generate tens of thousand of dollars if they go viral, says one expert.

“A site like TMZ makes maybe 100 million page views a month. Obviously, these fake sites aren’t getting anywhere near that, but if they can get really a fraction of that, they can make tens of thousands of dollars off of one of these fake stories over just a couple of days,” Tim Stevens, the editor at large with CNET, told CBS News.

Rich Hoover, who owns celebrity death hoax site FakeaWish.com and Global Associate News, told the broadcaster: “It’s important that the articles are structured so they’re not slanderous. In almost every single article, there’s a statement that says ‘drugs and alcohol were not a factor’.”

A few years back, Hoover told the New York Times that his fake news pieces generate a significant amount of revenue for him. “I’d be lying if I said there wasn’t some twisted sense of satisfaction or accomplishment,” he added.