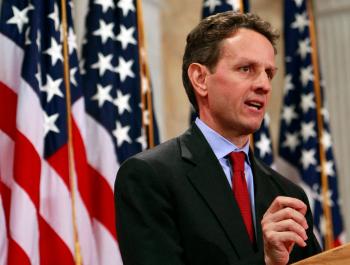 Speaking in Washington, Sec. Geithner unveiled President Barack Obama’s plan, with up to $2 trillion in potential funding from the U.S. Treasury, Federal Reserve, and private institutions to overhaul the American financial system and provide relief to cash-strapped homeowners.

“Without a powerful Economic Recovery Act, too many Americans will lose their jobs and too many businesses will fail,” Sec. Geithner told reporters. “And unless we restore the flow of credit, the recession will be deeper and longer, causing even more damage to families and businesses across the country.”

The new “Financial Stability Plan” was finalized after a heated debate from within the Obama administration on Monday evening. Sec. Geithner’s plan excludes some more drastic measures proposed by other Obama aides, including instructing banks on where to spend money and replacing bank executives.

The plan is a multi-prong approach aimed to address the most severe weaknesses in the U.S. financial markets. The major components include:

&61607; A new public-private investment fund, administered by the Treasury and the Federal Reserve, will buy up legacy toxic financial assets that currently plague bank balance sheets. The program encourages investors to invest in such toxic financial assets with federal guarantees, which will be outlined later. This is similar to the “bad bank” proposal that some analysts have suggested in the past. Sec. Geithner said on Tuesday that this program will start with $500 billion in financing, and could balloon to as much as $1 trillion.

&61607; The federal government will provide up to $1 trillion to expand the new consumer and business lending program, targeting the frozen auto, student, and consumer loan markets.

&61607; A new framework to regulate and oversee banks which have received bailout money. The plan will require banks to go through a “stress test” and banks that need capital will be provided funds from the existing TARP program. The Obama administration will also ensure greater transparency and disclosure from banks regarding where public money are spent.

A new Web site, financialstability.gov, will also provide Americans with periodic updates on how federal funds are utilized to stimulate the economy.

President Obama’s vision for rescuing the economy comes during a critical time, when the nation and the world’s economy is mired in a deep recession. The U.S. gross domestic product contracted last quarter at the quickest pace in decades, and almost 600,000 Americans lost their jobs last month.

To jump start economic growth, the U.S. Senate passed an $838 billion economic stimulus package. According to the Congressional Budget Office, approximately $293 billion is earmarked for tax cuts, and $546 billion for spending programs. The bill passed with scant Republican support.

The stimulus bill faces another hurdle as the two chambers of Congress must reconcile two versions of the bill—the House’s $820 billion plan and the Senate’s $838 billion plan.

In a rare occurrence of candidacy surrounding the bailout plan, Sec. Geithner admitted that while the new program is risky, involves a lot of taxpayer money, and will take time.

But doing nothing is even more devastating, he stressed. The administration did not request additional funds from Congress on Tuesday, but Sec. Geithner hinted that such a request could come later.

“As costly as this effort may be, we know that the cost of a complete collapse of our financial system would be incalculable for families, for businesses and for our nation,” he said.