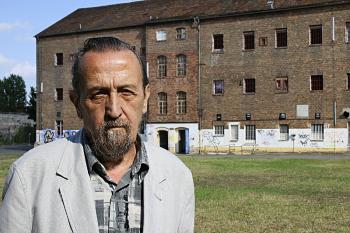 The GDR System: Two lives, One political System (Part I of II)

By Erik Rusch
Print
Two men, two paths—even though many aspects of their lives are different, both men, due to their backgrounds and consciences, experienced the pain of extreme measures of deprivation, intimidation and ostracism. This two-part article will explore what these men both experienced in their life: a suppressive political system influenced their future.

Raimund Anjust was born in Lichterfeld in 1935. At the tender age of 13, he was already viewed as a thorn in the side of the relatively young German Democratic Republic (GDR.) This totalitarian system held a viewpoint that mainly promoted the status of “workers and farmers"—physical laborers—and blatantly discriminated against members of other social strata.

Anjust was born into a middle-class family, and his schoolteacher, who was also party secretary, continually drove the point of Anjust’s background home to the young man. The teacher relentlessly ostracized him in front of his classmates by disparaging his background, saying that he belonged to a dying class system. He damaged the young boy's school supplies and constantly took discriminatory measures against him. In an effort to understand the demeaning behavior of his teacher, Anjust intently researched the works of Marx and Lenin.

He contemplated the works of Lenin, and the "rape of the bourgeois philosophy, as Hegel [a German philosopher (1770-1831)] expressed it.” Hegel’s philosophical writings examined the relationship between mind and nature. His ideas were appropriated by Marx, and served as the foundation for Marx’s theories of communism. Anjust came to understand, through his personal experience and research, how theories, when put into practice and taken to the extreme, can transform into the dogma that fuels persecution. His future experiences would only prove to corroborate the experiences of his youth.

In 1952, Anjust, as the son of an independent attorney, was refused higher education, with the excuse that “the quota was exhausted.” He was thus barred from any further formal education. Although this strategy was not recognized as government policy in the GDR, it was a discriminatory measure perpetrated against middle-class families, and families of the clergy.

Reinhard Gehlen (1902-1971) was a major general in the German military during World War II, and the mastermind of the Gehlen Organization. The most renowned master spy of the Cold War, Gehlen gathered intelligence information at the Eastern Front, and was later recruited by the U.S. military to form a spy ring.

Deprived of higher education, Anjust distributed flyers in the evening. These flyers expressed that the forming of a so-called friendly force in the GDR, such as the paramilitary police force, was nothing more than the expanding of its militarization, through the building up of a new army faction. At the same time, he pointed out the state’s deterioration of social benefits, and its consequences. In 1953, after being contacted by the forerunner organization of the federal intelligence news service, he joined the Gehlen Organization. He was tasked with collecting information on military and social activities within the GDR. This included monitoring Russian troop movements, with their shifts or changes. He was also asked to assist in the flight of a Russian major, from East Berlin to the Federal Republic of Germany.

A friend became a turncoat, betraying Anjust, and also provided other names to the Security Ministry, the GDR counterpart of the Gehlen Organization. Subsequently, Gehlen and some of his associates were arrested. Due also to the traitor’s collaboration with the GDR agency, the GDR State Security kidnapped a liaison man in Germany. He was anesthetized and abducted to the GDR.

After his arrest, Anjust was taken to the former Cottbus district office of the Ministry of the Interior, which also served as office for the State Security. He suffered sleep deprivation for several days – he was interrogated all night, and deprived of rest during the day. Later, he was held in a dark prison cell, which due to its tiny dimensions, forced him to remain in a standing position.

The State Security hoped to force a confession from Anjust through means of torture. He recalled that the food was terrible. Furthermore, he was denied any type of personal hygiene for four months, and for many months he was also deprived of his privilege to walk outside the prison. To get some exercise, he would constantly walk in a figure eight pattern in his small cell.

After five months of pre-trial confinement, Anjust was sentenced to a 10-year prison term in a secret trial. The sentence was read during a public forum, and his charge was announced as “Danger to Public Security.”

At the time, Anjust had just turned 18. Following his sentencing, he was held in the Cottbus Penitentiary, in a so-called solitary cell of about 10 meters square, with six other prisoners. The cell was in a building that has been demolished since then, but the detention compound can still be viewed today. Not only reserved for political prisoners, the premises were also for death-row inmates, and those given a life sentence.

Anjust could not leave his cell for the two years that followed, but afterward he was assigned to forced labor in a factory that produced cushions. He was permitted to leave his cell to work in the factory, which was located in the prison compound. The factory maintained three shifts for around-the-clock work.

Every two months he was allowed to write 20 lines, but most of his writings were confiscated. For 30 minutes every 3 months, he was permitted to speak only to either his parents or siblings. These family visits were restricted to a special “visiting room.” A guard was present to monitor all discussions.

Anjust learned that with political influence from the Federal Republic of Germany (FRG), it could be possible to get a reduction in prison sentence. He asked his mother to apply for a sentence reduction through Wilhelm Pick, the first and only President of the GDR. As a result, his sentence was reduced to five years.

After three years at the Cottbus Penitentiary and the period of forced labor there, he was transferred to the forced labor camp, “Schwarze Pumpe” [Black Pump.] At that time, construction projects for the most significant industrial energy and heat production compounds in the GDR had just been completed. The inmates were housed in barracks, which reminded him of a concentration camp. In January of 1958 he was released, after a serious work-related accident, followed by a stay in the hospital ward of the Bautzen prison.

Anjust became determined to escape from the GDR. After his first escape attempt to board a train to West Berlin, he was captured and imprisoned in the Cottbus prison. He was sentenced to a concentration camp in Luebbenau (located in the Brandenburg District.) His second attempt to escape the GDR came shortly after his release from the camp in November of 1959, and was a success. After his escape to the FRG, he settled in Berlin. His first major achievement was to attend and finish post-secondary school, what he had been deprived of in the GDR.

Anjust is now father to two grown children, and is 72 years old. When asked what his worst nightmare was while in the former GDR, he replied: “They stunted my childhood development, because they discriminated against those who had not been born into the worker’s or farmer’s class.”

To sum up his life experiences, Anjust was asked what the most important insight gained from his tribulations was, and how this contributed to his positive social development. He replied: “that one stays true to oneself and retains moral character while imprisoned. For a young person, imprisonment can be a valuable learning experience. It can strengthen moral character, and allow one to gain experiences and insights one could not gain in any other way.”

The contact with many people and their fates while imprisoned was also a valuable lesson for Anjust. Many inmates were driven to madness due to the inhumane treatment. He felt that what saved him was his faith that he had not done anything wrong, and that he had been on the side of right. This knowledge gave him the moral and mental strength to survive the trauma of unjust incarceration.

Horst Pfeiffer also “did time” at Cottbus. For his story, please see Part II of Two Lives – One Political System .

The town of Cottbus is located in Germany, on the river Spree. It is near eastern Europe, south of Brandenburg, in the German state of Prussia. The Cottbus prison is known as a “forgotten prison.” Such prisons mainly detained political prisoners, in the formerly communist state of the German Democratic Republic.