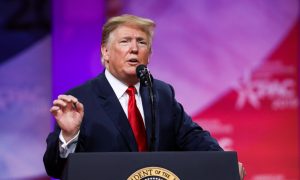 Majority of Voters Approve of Trump's Handling of the Economy Ahead of 2020 Election: Poll
0
Share Now
TelegramFacebookTweetEmailTellMeWeReddit
Copy Link 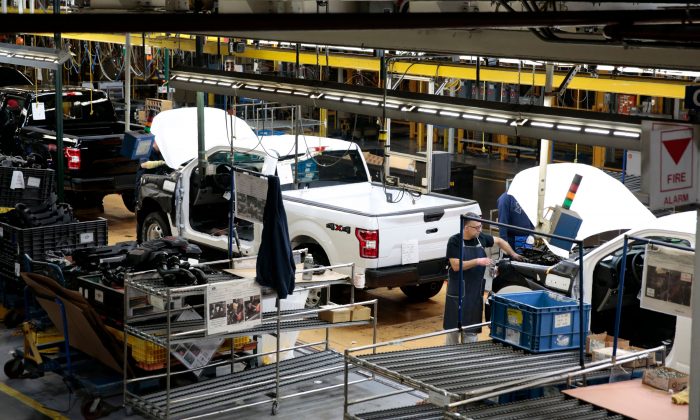 GDP Growth at 3.2 Percent in First Quarter as Economy Steamrolls Over Skeptics

The American economy picked up pace in the first quarter of 2019, with the country’s gross domestic product (GDP) growing at an annualized rate of 3.2 percent.

The solid growth relieved the worries of some economists voicing their concerns of an economic downturn after the GDP 2.2 percent growth pace in the last quarter of 2018.

The worries were fueled by a slew of weak economic indicators, including unusually slow job growth in February as well as the backdrop of 2018’s mutual increase of tariffs accompanying the trade negotiations with China.

The economy, however, has proven more resilient.

Imports, which lower GDP in the BEA analysis, decreased. Some major downward pressure on the GDP was the decrease in residential investment.

“Supply-side tax cut, deregulation, opening the energy sector, pro-growth trade reform, that’s improving the supply side, the production, and the investment side of the economy,” Kudlow said.

Over the past four quarters, the economy grew on average by 3.25 percent, a number only beat twice since 2006.

Trump has consistently extolled the economic boom under his administration.

“Our economy is doing so well, perhaps the best it’s ever been in our history,” he said on April 24.

He took another victory lap at his April 27 rally in Green Bay, Wisconsin, after the GDP number dropped.

“Just yesterday it was announced that the United States economy grew, some people thought unexpectedly. Not me, I didn’t think [that],” he said. “In fact, frankly, if we had the Obama interest rates—low, almost nothing, actually nothing—and if we had quantitative easing instead of tightening … we would have been even much higher than this. But this is very high.”

He noted the economy performed well despite the partial government shutdown in January, some extreme weather, and the fact that the first quarter is often the slowest of the year.

“We did 3.2 percent in the first quarter GDP, crushing expectations, and accelerating our economic boom,” he said.

He’s recently urged the Federal Reserve to avoid further rate hikes and tightening of its balance sheet, which he and some economists blamed for the slowdown in late 2018. Four increases in 2018—which hasn’t happened since 2006—prompted a swift rebuke from the president. Since then, the Fed hasn’t signaled another rate hike and the new GDP numbers are not expected to prompt one.

Kudlow even suggested a rate cut may be in order since the Fed’s own indicator of inflation has slipped in late 2018.

Some of the best economic indicators have been coming from the job market, where the unemployment rate stood at 3.8 percent in March with a 12-month average at 3.84, the best since 1970.

Fed Vice Chairman Richard Clarida acknowledged earlier in April the central bank was surprised that the job market hasn’t overheated on labor shortages. Indeed, the unemployment rate excludes people who haven’t sought a job in the past four weeks, and it was mostly these people who were getting hired in 2018, according to Labor Secretary Alex Acosta.

The administration has worked on alleviating labor shortages by promoting apprenticeships and other forms of job skills training.

After Trump signed into law his prison reform, the First Step Act, which mainly aims at reducing recidivism, he proposed a Second Step Act to make it easier for former federal prisoners to get jobs.

Trump also has repeatedly said he wants Congress to move the immigration system from emphasizing chain migration and diversity to attracting talent—a merit-based system. Republicans are largely in favor of the change, but Democrats are unlikely to cooperate as it would give Trump another policy victory before the 2020 election.