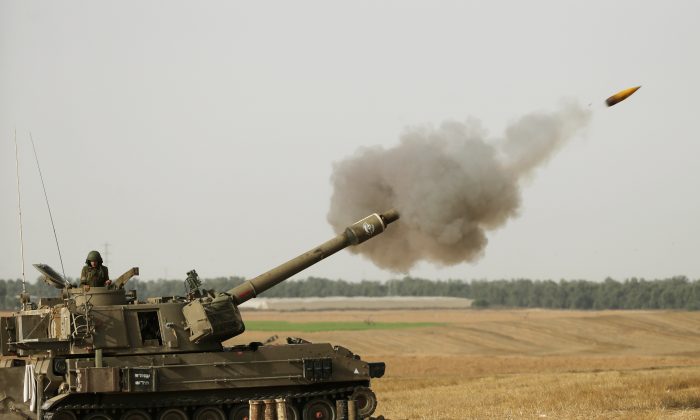 Gaza Spiralled Into Crisis While the World’s Eyes Were Elsewhere

The world was no longer watching – at least, that was what both Israelis and Palestinians seemed to feel when I visited Jerusalem and the West Bank late last month.

Yet the people on both sides of the conflict suspected what outsiders did not: that things could go badly wrong very soon. Now missiles strike targets in Gaza to stop rockets launching out of there. With a combination of horror and despair, the world is watching.

I had been on the West Bank talking to people for my next book: Headlines from the Holy Land. Travelling back to Jerusalem, I wondered if I could step off the bus at the main check point to take pictures of some of the fortifications.

When I was based in the region, this might have been something which could get you into trouble – perhaps only shouted at; perhaps warned off with a shot. At the back of my mind was always the death of James Miller, a British cameraman fatally shot by the Israeli Army in Gaza at the time I lived and worked there as the BBC’s correspondent.

All the people I asked whether it was safe or wise to take photos at the Qalandiya checkpoint dismissed my concerns. One Palestinian journalist even told me it had become “like a TV studio” there. I jumped off the bus, took my pictures, and got on the next bus back to East Jerusalem.

A week later that side of the city was no longer as calm. Palestinians, angered at the abduction and killing of a Palestinian teenager, clashed with Israeli Security forces. That abduction was apparently carried out in response to the earlier killing of three Israeli teenagers. At the time of my visit, the three Israelis had been missing for ten days, but their deaths were yet to be confirmed.

The atmosphere I experienced – where you could pass checkpoints without hindrance, and photograph the concrete wall next to them – was deceptive.

Two weeks later, the Israeli-Palestinian conflict has reached a level of violence not seen since Israel’s last major offensive on Gaza, in November 2012. Then, as now, Israel says its operation is aimed at stopping rockets being launched at Israeli targets. Now, as then – given the density of population in the besieged coastal territory – the majority of the dead are civilians.

That’s more like the Gaza I knew when I lived there from 2002-2004, at the height of the second intifada, or Palestinian uprising against Israel. Perhaps because of my previous experience, I too feared the worse when I read of the disappearance of the Israeli teenagers. There seemed a strong chance their deaths, if such they were, would not be the last.

Israelis I spoke to on my first morning in Jerusalem asked if the story was being covered in the UK. I explained that Iraq and Syria were dominating the British headlines from the region.

They were dominating news-gathering agendas, too. For while the calm I experienced crossing into the West Bank two weeks ago may have been temporary, something else had changed since the second intifada: the number of international journalists based in Jerusalem. It had fallen significantly. Many US news organisations had left – driven away by dwindling budgets, drawn away by more dramatic events elsewhere in the Middle East. Rumour suggested some big British names were planning to follow suit.

Would it matter if Jerusalem ceased to be the journalistic hub it has been in recent decades? There are good reasons for going elsewhere – not least that Israel’s relations with some of its neighbours make it a poor departure point for travel in the wider Middle East.

My own experience with my camera that afternoon taught me a valuable lesson. My concern that taking pictures might land me in trouble was based on my experiences of a decade ago. Reporters working there more recently knew I was not really taking a risk. Yet if things had changed, it was only on the surface. The bloodshed in Gaza of recent days shows that the previous quiet did not mean peace.

That leads me to another reason why reporting from Jerusalem is so valuable. Palestinians and Israelis have little direct contact. In that part of the world, international journalists are among the few who can travel widely, including to Gaza.

Even diplomats, divided as they are between missions to Israel and the Palestinian Authority, rarely get the full picture. Those from the EU and the US are not even permitted to talk to Hamas), which has been in charge of Gaza for the best part of a decade. They may instead seek journalists’ views.

So reporting from Jerusalem, whatever its shortcomings, is an invaluable resource for understanding the region. Diplomacy, in the shape of the latest failed talks, has ground once more to a halt. News organisations should reflect that no peace process should not mean no correspondent.

James Rodgers does not work for, consult to, own shares in or receive funding from any company or organisation that would benefit from this article, and has no relevant affiliations. This article was originally published on The Conversation. Read the original article.