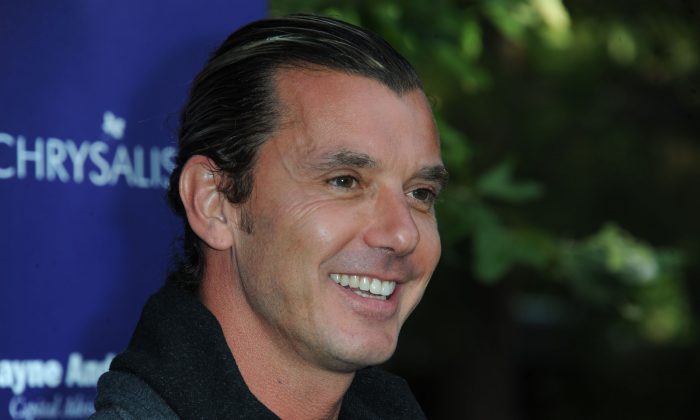 Gwen Stefani, one of two new judges on The Voice, is the wife of musician Gavin Rossdale.

The couple have a pretty easygoing relationship, with Gwen sending him an email when she found out she was pregnant with Apollo.

“By the way, you had another kid. I was surprised,” Howard Stern said to Rossdale recently. “I thought you were done.”

“Me too,” Rossdale, who has an estimated net worth of $35 million, quipped. “I got this email on the road, from Gwen, and the title was in capitals, ‘LOOK WHAT YOU DID TO ME NOW.’ I was like, ‘What is this?’ My blood pressure went through the roof. And I opened the e-mail, and it was the pregnancy stick.'”

Daisy Lowe, Rossdale’s only daughter, was born to his former girlfriend Pearl Lowe. The model is now 25 years old.

Both Stefani, who is worth an estimated $80 million, and Rossdale are very busy with their music careers, and juggle taking care of the children.

The Daily Mail published pictures just this past weekend of Rossdale with six-year-old Zuma and the family dog Chewy out and about while visiting Stefani on the set of her new music video in Los Angeles.

Stefani, who recently collaborated with Maroon 5 and fellow “Voice” judge Adam Levine, is said to be releasing new music in October.

While Stefani nabbed a judges spot, Rossdale, who is part of the band Bush, is working as an advisor on her team.

Stefani told Us Weekly that she and Rossdale have struggled some working together.

“Honestly, at first I’d say, ‘Oh, yeah, that’s a good idea,'” Stefani said. “But when it came down to it, because it all kind of happened at one time: starting the show, picking advisors… it happened really fast in a condensed period of time, and I had a freak-out.”

“We literally got in a fight the night before because I was like, ‘I don’t know about this…'” she recalled. “I got calmed down and it was really fun.”

“It was just awkward, because we had never done anything [together],” Stefani continued of her husband. “We had only collaborated on making babies together, we had never done anything outside [of that]. I was really nervous about having him there, we have different opinions about music. We like different music, and I was like, ‘You know what? Let’s embrace it. Let’s just do it.'”

Rossdale told Fuse TV that “doing and sharing it with Gwen was fun.”

He also admitted that he doesn’t think he’d get far if he was a contestant on The Voice, saying that “They’re just really, really good singers!”

“I came from a different school of slaying it through the clubs and playing shows like that and learning it in that way. They’re all such really good singers. I doubt I would’ve got anywhere on that show,” he said.

“The way that I think about it, none of them sing that good without having worked on it in their houses for many, many years. No one just gets up one day and goes, ‘Oh, I’ve found my voice!’ I don’t have any problems with how things are moving. Some people get really upset by those shows. Certain musicians can’t believe it’s so easy. It’s just the way it is. It doesn’t bother me. Maybe I just flatline it too much, but it doesn’t bother me.”