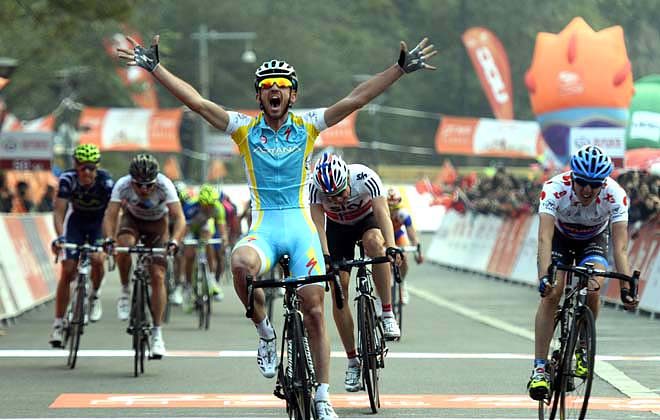 Francesco Gavazzi of Astana, normally a sprinter, showed he could get up hills as well, snatching a win in Stage Three of the Tour of Beijing with 20 meters to go.

The Italian cyclist had to get up three categorized climbs just to make it to the final cat 3 ascent to the finish. He then had to beat Garmin-Sharp’s Dan Martin, a real climber, as both riders caught up to Sky’s Edvald Boasson Hagen, who ran out of power just 20 meters from the finish line.

Gavazzi had the legs—he crossed the line a few feet ahead of the Garmin rider, earning the win and maintaiining second place in the general Classification.

“There was only one way for me to win today—I had to wait and wait and see how things developed,” Gavazzi told Cyclingnews. “To be honest, when Boasson Hagen attacked, I thought it was over, as he is the perfect rider for this kind of finale.”

It was Gavazzi’s first win of the season and his first win with his new team, Astana.

“I am delighted with the victory, which I have been chasing for the whole of this year. I have had lots of placings this season, partly due to bad luck and partly—like yesterday—because I found myself up against riders who were stronger than me,” Gavazzi said on the team website. “I was desperate to end the season well: this is my first year at Astana and I wanted to repay the faith of this team, which has always believed in me.

“There are still two stages to go until the end of the Tour of Beijing and I am in second place—40 seconds down on Tony Martin—with the hardest stages behind us. Now I have got to defend second place and try to make life difficult for the leader of the general classification.”

Stage Three started with a Cat 2 climb, but all the riders had fresh legs so everyone made it over in good shape. A group of seven riders: Pim Ligthart and Johnny Hoogerland (Vacansoleil,) Mikel Nieve (Eiskaltel,) Matthieu Ladagnous (Francais des Jeux,) Andrey Grivko (Astana,) Christian Meier (GreenEdge,) and George Bennett (RadioShack) attacked before the next climb, a Cat 3, and opened a gap of nearly four minutes over the next climb, a 10.8-km Cat 1 averaging 6.4 percent. Though long, the climb wasn’t steep enough to crack any riders.

The first climbing portion was done by the halfway point of the 162.5-km stage, giving everyone plenty of time to recover and catch up.

Omega Pharma Quickstep did most of the chasing for the first two-thirds of the race. Then Liquigas and occasionally Garmin-Sharp lent a hand—Liquigas had Eros Capecchi third in GC, fifty seconds down, and Garmin’s Dan Martin was only 56 seconds behind the leader. No one expected Gavazzi to defend his second place.

Stage Four heads northwest from the Great Wall 166 km to Chang Ping, with a trio of Cat three climbs followed by a fast descent to a very slightly uphill finish—surely a sprint. The route should present no problems for Tony Martin; he should be able to retain the leader’s jersey by simply following any dangerous break and staying near the front at the finish.

The gap dropped swiftly once the chase really started, and with ten km left Christian Meier set out on his own as the others sat up. Meier lasted until the lower slopes of the climb and was caught.

The racing started for real then. First Garmin’s Dan Martin and Ryder Hesjdal took the lead, then Sylvain Georges of AG2R led an attack with and FDJ rider. Dario Cataldo pulled it all back together for Omega Pharma; then Georges set off again. This time Tony Martin responded, with a Sky rider, but didn’t put out a lot of effort. Georges was left out front until the last four kilometers when the climb started getting a little steeper.

As the peloton approached Georges with 3500 meters to go, Euskaltel’s Igor Anton attacked. Anton opened a fair gap; then Sky’s Edvald Boasson Hagen put in a huge burst, easily catching the Spanish rider and going right over the top.

At two kilometers it looked like Boasson Hagen had captured the stage, but he started slowing as the road got steeper. He still had 17 seconds with 1000 meters to go, but now the peloton was flying. At 150 meters his pursuers were in sight, and with 25 meters to go the peloton was right behind the Sky rider.

Gavazzi and Dan Martin both passed Boasson Hagen with 20 meters to go, and Gavazzi won the sprint to the line. Boasson Hagen held on for third.

“It was hard finish, but a good stage for me, although I’m a bit disappointed not to win after all the hard work of my teammates,” Martin told Cyclingnews. Still, he moved up to third in GC.

Boasson Hagen had scouted there route and planned to attack exactly where he did.

“I planned to go exactly where I did but it wasn’t the plan that the other guys would catch me,” he told Cyclingnews. “If Martin hadn’t gained time yesterday, then maybe I could have waited for the sprint. But that would have been a different race. So I was just thinking I needed to gap off and get as many seconds as possible.”

Stage Four heads northwest from the Great Wall 166 km to Chang Ping, with a trio of Cat three climbs followed by a fast descent to a very slightly uphill finish—surely a sprint. The route should present no problems for Tony Martin; he should be able to retain the leader’s jersey by simply following any dangerous break and staying near the front at the finish.