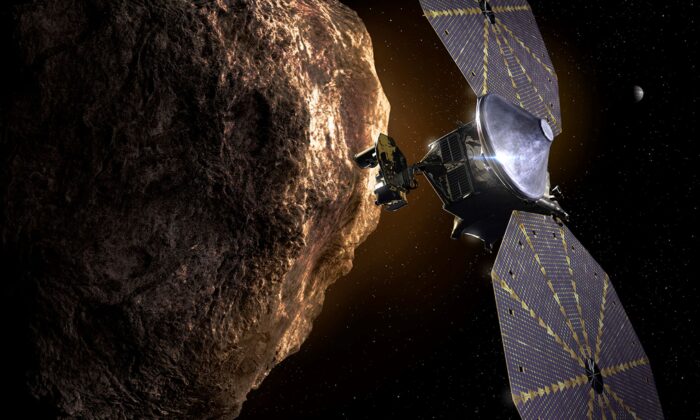 This image provided by the Southwest Research Institute depicts the Lucy spacecraft approaching an asteroid. (SwRI via AP)
Thinking About China

Most Americans will enjoy their Thanksgiving this year unaware that a new arms race between China and democracies may be unfolding in the heavens.

Defending planet Earth from rogue asteroids has been a longstanding concern of the United States and some of its allies.

The European Space Agency (ESA) estimates that the impact of just a 150-meter diameter asteroid could approach the power of a 180-megaton nuclear explosion, or 9,000 Hiroshima size bombs.

Since January 2016, the U.S. National Aeronautics and Space Administration’s (NASA) Planetary Defense Coordination Office has been charged with tracking space objects large enough to threaten Earth and organizing a defense.

On Nov. 24, 2021, NASA is scheduled to launch the initial American effort to test technologies that could be used to defend against threatening asteroids. The Double Asteroid Redirect Test (DART) mission will test a new solar electric propulsion drive to see if an estimated Oct. 2, 2022 collision can alter the orbit of the small 140-meter diameter asteroid Dimorphos, to be closely observed from the Earth.

Even a very minor change in the orbit of a threatening asteroid can cause it to miss the Earth.

DART emerged from an earlier collaboration with the ESA called the Asteroid Impact and Deflection Assessment (AIDA), a small satellite that would have followed DART and closely observed its impact. But this program was cancelled in 2016.

However, a follow-on ESA mission called Hera will be launched in 2024 to assess DART’s asteroid crater. Italy and Japan are also involved with the DART mission.

China has also started to prepare programs for planetary defense, but Chinese investments to that end could result in powerful military-space capabilities and there are immediate dangers in cooperating with China.

For example, the People’s Liberation Army (PLA) controls all Chinese space programs, as it seeks “dual use” military benefits from all Chinese space investments. So any potential planetary defense cooperation with China could assist PLA space warfare capabilities that might be used against the democracies.

China is not part of the DART mission and apparently is not going to rely on U.S. and European planetary defenses, indicating that it is working on its own.

Around 2025, China will launch a 10-year mission to land on an asteroid and return samples to Earth that will also test Chinese technologies for asteroid defense.

“Mastering the landing technology means that if an asteroid hits the earth in the future, our country can directly approach and intervene,” noted Ye Peijian, engineer at Chinese Academy of Sciences and commander of Chinese Moon Program, in an April 24 report in Global Times.

Most recently, from Oct. 23 to 27, “The 1st China Planetary Defense Conference” was held in Guilin city, in China’s Guangxi region. A Chinese source, however, has indicated that this conference may have been the fourth one organized under the “guidance and support” of China’s State Administration for Science, Technology and Industry for National Defense (SASTIND). The third conference was held in Nanjing in August 2020; the second in Beijing in September 2018; and the first in Minyang in January 2018.

Conference presentations have not been made public, although some may appear later in Chinese aerospace journals. But a list of the Guilin conference papers did appear on multiple Chinese websites.

One paper listed was titled, “Discussion on the Mechanism and Effect Evaluation of Nuclear Explosive Defense Against Asteroids,” by Shen Yi, Chinese Academy of Engineering Physics, Institute of Systems Engineering.

While it is not yet possible to determine if any of the Guilin papers advocated basing asteroid defense nuclear or laser weapons on the Moon, one paper indicated the Moon could be part of a defense system: “Observation of Near-Earth Asteroids Based on Lunar-based Telescope,” by Hu Zhenyu, Shanghai Institute of Aerospace Systems Engineering.

Wu Weiren, an academician with the Chinese Academy of Engineering, who is also the chief designer of China’s lunar exploration program, was the chairperson of the Guilin conference.

Wu’s biography on the website of the International Astronautical Federation states that he, “vigorously promotes international cooperation in space exploration and popularization of science, and [has] coordinated the scientific payloads developed by Germany, Sweden, the Netherlands, etc., to be carried on board Chang’e-4 probe and QUEQIAO relay satellite.”

Most likely, as in many other spheres, China will pursue its own programs to fulfill its own objectives. Development of powerful space-borne nuclear and laser weapons would directly contribute to coercive or kinetic exercises needed to gain control of the Moon, or Mars—or to win battles on Earth.

Such possibilities would put a new cast on U.S. and international programs intended to build capabilities for defense against rogue asteroids. At a minimum, they should be pursued if only to deny China the option of letting some asteroid through that would severely damage the United States and/or other democracies.

The Chinese Communist Party also understands that to consolidate future political-military hegemony on Earth, it must also control the Earth-Moon System.