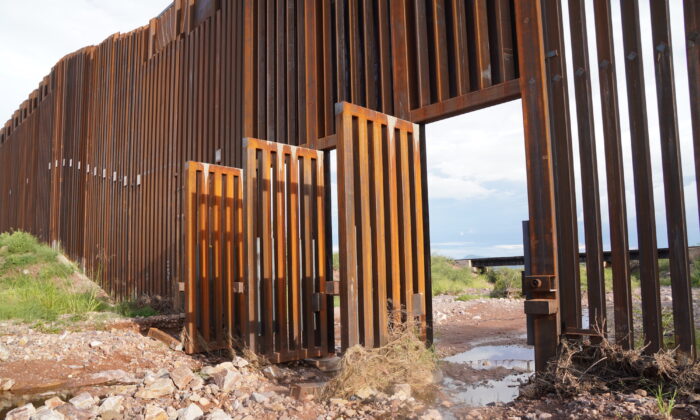 Open gates give easy access into the United States for illegal aliens crossing from Mexico near Douglas, Ariz., on Aug. 24. (Allan Stein/The Epoch Times)
US

This is the fourth article in a series on illegal drug and human smuggling along Arizona’s border with Mexico.

Sam, the owner of a private Arizona security firm, stopped the truck and put it in park.

Something, though, was glaringly out of place on Aug. 24.

Three massive irrigation gates built into the steel border wall fence were open for anyone to walk through.

On the Mexican side of the border wall, fresh water bottles lay on the ground, covered in dew. Someone had also left origami puppets with the word “Peace” and notes in Spanish and English in plastic zip-closure bags.

“Look with compassion on the whole human family; take away the arrogance and hatred which infect our hearts; break down the walls that separate us,” the note reads.

Humanitarians leave water bottles, food for the illegal immigrants, and even children’s toys to pick up as they cross into the United States through the open gates, said Sam (a pseudonym he uses to protect his identity and that of his company).

“There’s another open gate bigger than this one, down that way,” he said, pointing up the easement. “There are five or six gates like this”—all open.

“And this is the new wall Trump built. What sense does it make? How about closing the gates?”

Sam believes the Roosevelt easement is key to border security through enforcement from the federal level.

The easement is a 60-foot-wide dirt road owned by the federal government along the U.S.–Mexico border, spanning nearly 2,000 miles across three of the four border states.

In 1907, President Theodore Roosevelt established the federal easement with the intention of protecting border states against smugglers operating between the United States and Mexico.

Border wall construction in Arizona stopped soon after President Joe Biden took office in 2021. Its projected construction cost was more than $21 billion and would require nearly four years to complete.

Sam said the Roosevelt easement is like a constitutional “no man’s land,” where federal law enforcement could do the most good at preventing illegal immigration.

In July 2020, the Bureau of Land Management announced the transfer of 65.74 acres of federal public lands in Arizona and New Mexico to the U.S. Army to aid the installation of power and utility infrastructure to support border wall security.

On Aug. 24, much of that infrastructure appeared incomplete along the portion of the easement between the cities of Bisbee and Douglas in Arizona.

Sam told The Epoch Times that thousands of illegal aliens pass easily through breaches in the wall each month, with little to stop them.

Signs written in Spanish greet the migrants with an emergency phone number to call. “No Trespassing” signs are written in English.

“I tried to push one [gate] shut. It’s pretty hard to shut,” said Kyle, Sam’s security specialist, riding in the truck’s passenger seat. “They would be secure if they were [kept] shut.”

“There are people here that are tired of the bull,” Sam said. “People aid the cartels and the migrants because they’re migrants themselves.”

Further up the road, a lone U.S. Border Patrol officer sat in a pickup truck, watching as we approached.

“Why are the irrigation gates kept open?” he was asked.

The officer responded that the gates stay open during monsoon season, allowing water and debris to wash through and prevent flooding.

“But doesn’t that make it easy for migrants to cross into the United States?”

The officer nodded and said the location has been “somewhat active” with illegal crossings.

As we moved further up the easement, we found more open gates and even strips of camouflage fabric caught in barbed wire—signs of illegal crossings.

“Whoever was hauling backpacks got hung up on here,” Kyle said.

Illegal immigrants purchase camouflage backpacks and other necessities at makeshift stores along the human smuggling routes run by the Mexican drug cartels. It’s kind of like a mini retail chain, Kyle said.

Sam said that many illegal aliens would stop coming if law enforcement had the manpower and resources to intercept them and send them home.

Though Sam’s security firm is willing to help monitor the border, law enforcement is hesitant to take them up on the offer, saying they aren’t sworn officers, and they don’t want the liability. Sam said that his firm hires only people with military or law enforcement experience, and only after a strict background check.

“I’m not going to hire somebody who will be a liability. I don’t want loose cannons—shoot first and ask questions later,” he said.

U.S. Customs and Border Patrol didn’t respond to a request for comment. The Pima County Sheriff’s Department deferred to the Border Patrol when contacted by The Epoch Times.

Kyle said it’s “disheartening” when U.S. citizens are left to deal with crime and other adverse effects of illegal immigration.

“That’s why it’s disheartening for me to talk to [a rancher], and he’s calling for help, and nobody shows up. Or they’re five hours late,” he said.

“It’s a national security issue. It’s like, ‘We’ll get there whenever.'”