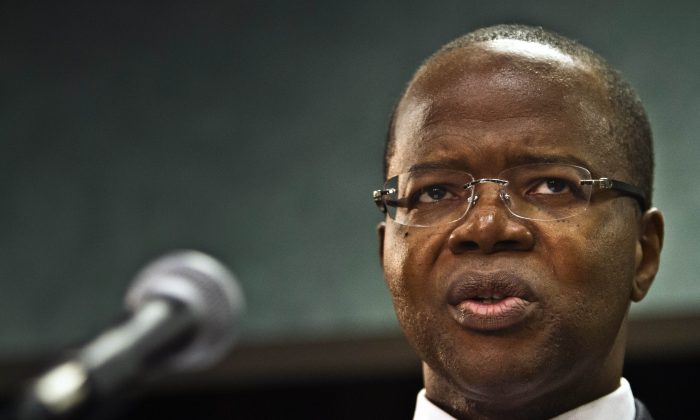 Twelve alleged members of the “Gates Avenue Mafia” and 20 others have been indicted with conspiring to sell firearms, heroin, and cocaine following a year-long investigation that involved officers working undercover, Brooklyn District Attorney Ken Thompson announced on Thursday.

The activities of the gang caught the attention of the community in Bedford-Stuyvesant after an 11-year-old girl, Taylonni Mazyck, was caught in the crossfire between the Gates Mafia and a rival gang in May of 2013. Mazyck caught a bullet through a chin that hit her spine, and she is now paralyzed from the waist down.

“There is absolutely no reason why an innocent 11-year-old girl should be caught in a hail of bullets while sitting outside with her family on a spring evening and is now paralyzed,” Thompson said in a statement. “We must reclaim streets such as Gates Avenue that are too often plagued by gang violence and blatant drug dealing, and these arrests will help us do so.”

Mazyck was hit by one of the 10 bullets fired by Kane Cooper, an alleged member of the Young Bosses gang, that were aimed at members of the Gates Avenue Mafia hanging out halfway down the block where Mazyck lived.

Cooper has since been charged with attempted murder.

During the investigation, 29 guns, $24,000 in cash, and an unspecified quantity of illegal drugs were found.

The scope of the drug operation stretched to Gloversville, in upstate New York, where crack cocaine could be sold for a higher price. Alleged Gates member Rasheen Behlin is charged with attempted murder after beating up and nearly shooting to death a man in Gloversville last April.

Behlin and two accomplices alleged broke into the apartments of two customers, pistoled-whipped them, and broke their knees and ankles with hammers, and shot one of the victims in the face through a couch cushion.

In a police raid in Gloversville the day after that incident, $5,700 worth of cocaine was found that the police believe were brought by Gates members from Brooklyn.

Behlin was arraigned on Wednesday and is held on $1 million bail.

All but seven of those indicted were arrested yesterday. During the investigation, 29 guns, $24,000 in cash, and an unspecified quantity of illegal drugs were found.

The 12 alleged members of the Gates Mafia and nine others are charged with a 98-count indictment, with bails ranging from $1 million to $150,000. Of the indicted, eight lived on Gates Avenue in Bedford-Stuyvesant.

But the investigation isn’t over yet. Seven of those indicted have yet to be arrested. Thompson said they’re most likely hiding in the South, the New York Post reported.

Thompson said that some members of the Gates Mafia outsourced their hits on rivals to a man from Baltimore, and that two of the men arrested had smuggled guns from North Carolina, the Post reported.