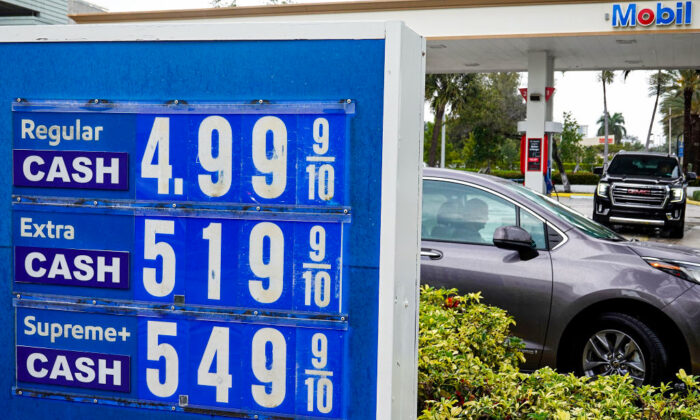 A sign reflects the price per gallon of fuel in a March 2022 file photo. (Joe Raedle/Getty Images)
Economy

Many areas are reporting marginally lower gas prices or flat gas prices over the weekend, following a stratospheric rise in fuel costs resulting from long-developing trends in the oil industry and the impacts of the Russo-Ukrainian war on the global fuel supply.

Meanwhile, the Philadelphia Enquirer reported that gas was down one cent per gallon in southeastern Pennsylvania and as much as four cents per gallon in southern New Jersey, indicating that the rising cost of gas has levelled off for the time being in the region.

Even prior to the war, gas prices had risen precipitously in a relatively short span of time due to a myriad of factors.

The backdrop of rising gas prices is a background of general price inflation of the U.S. dollar, but this alone is insufficient to explain the disproportionate rise in fuel costs.

Some industry insiders believe that the oil industry has entered a period of oil scarcity, in one stage of a perennial cycle that sees the global oil supply fluctuate based on internal industry dynamics. During periods of oil abundance, companies tend to de-emphasize developing new infrastructure for oil extraction, preferring instead to allow investors to collect profits on previously built infrastructure. Eventually, this dynamic catches up with the global supply, resulting in oil scarcity and higher prices and catalyzing the industry to reinvest.

However, the normal contours of this cycle have been exacerbated by a number of circumstances particular to the 2020s. A nationwide labor shortage throughout the past two years was especially hard on the oil industry, which has struggled to attract qualified young people to careers in a fossil fuel industry threatened by environmentalists and politicians—a survey last year revealed that 10 percent of employers found themselves re-hiring retired employees to compensate for the skills shortage, while 43 percent of oil workers expressed a desire to leave the industry altogether.

Read More
EXCLUSIVE: ‘Most Unfavorable Political and Regulatory Environment for Our Industry I Have Ever Seen’, Says US Oil & Gas Assoc. Chief
Why Is Biden Threatening an American Pipeline While Begging Russia, OPEC for Oil and Gas?

The war in Ukraine took this situation to newer extremes, very quickly pushing gas prices to a record high of $4.43 per gallon in the national average, with prices ranging as high as $5.79 in San Francisco, the most costly city for gas.

Overall, despite minor variations throughout regions of the United States, it appears that gas prices have momentarily stabilized.

However, this tapering off may be little consolation to American drivers accustomed to much lower gasoline costs. In March of last year, gasoline was sold at $2.81 per gallon, according to the U.S. Energy Information Administration. What constitutes a price stabilization this week is still over $1.50 more costly per gallon than the price of the same gas just one year ago.

These costs are not only a burden for those who drive, but will be filtered down to all consumers through inflated costs of shipped goods, as suppliers will be compelled to raise prices to cover higher shipping costs. Ultimately, this burden will fall upon the consumers, who may find wages struggling to keep up with the rising cost of living in the highest-inflation economy in decades.