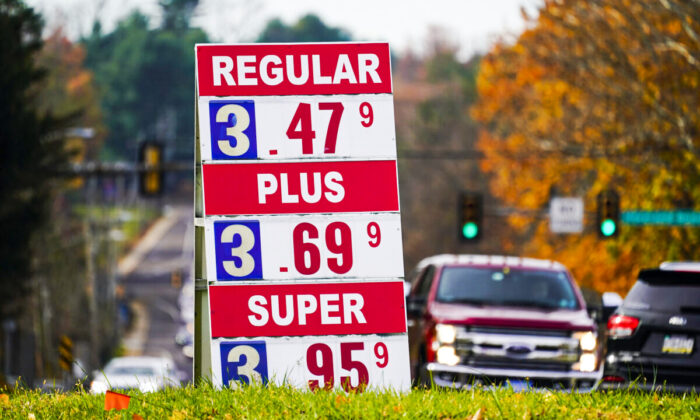 Gasoline prices continued their downward drift on Dec. 20, falling around two cents per gallon over the week and down 10 cents from a month ago, with an easing in crude prices helping put downward pressure on costs at the pump.

The national average regular gasoline price fell to $3.308 per gallon by Dec. 20, according to the American Automobile Association, down from $3.330 a week ago and $3.410 a month ago. Monday’s national average gas price ranged from a low of $2.896 in Oklahoma to $4.667 per gallon in California.

In November, U.S. regular gasoline retail prices averaged $3.39 per gallon, which was the highest monthly average since September 2014, according to the Energy Information Administration. The agency expects prices at the pump to drop to an average of $2.88 per gallon in 2022.

Tom Kloza, global head of energy analysis at the Oil Price Information Service at IHS Markit said in a Twitter post that he expects drivers will see more relief at the pump this week.

“National average gas price likely headed below $3.30 gal and 40-50 percent of drivers may see less than $3 gal by early next week. Be careful what you wish for–omicron is delivering a “Monkey’s Paw” downdraft in oil prices,” Kloza wrote at the end of last week.

Omicron headlines several weeks ago sparked fears of renewed lockdowns, sending crude prices tumbling over 11 percent on Nov. 26, one of the biggest ever one-day plunges. While oil prices have recovered some of those losses, they remain well below recent highs of around $85 a barrel in late October. By 5:50 a.m. New York time on Dec. 20, West Texas Intermediate (WTI) futures were trading at around $68 a barrel, down around 3 percent intraday, and Brent crude futures were down around 2.5 percent at around $71 a barrel.

While gasoline prices have eased in recent weeks, they remain far above the year-ago national average of $2.218 per gallon.

Elevated gasoline prices have posed a political problem for the Biden administration, with Republicans criticizing President Joe Biden for relying on OPEC to ramp up supply to cool prices at the pump, rather than boosting domestic oil production.

Fuel prices were one of the major factors pushing up inflation in the United States, which soared to a multi-decade high in November.