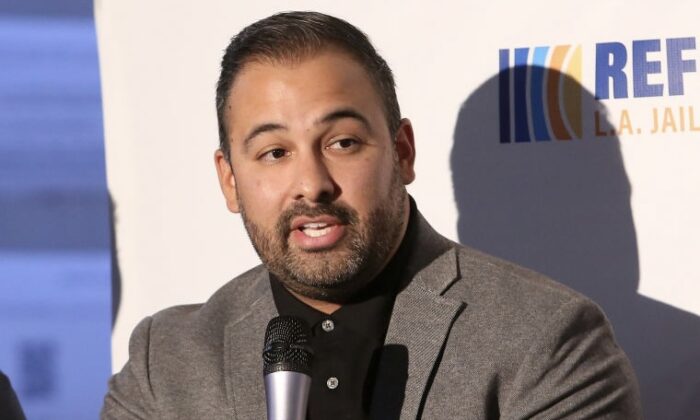 Joseph Iniguez, 36, was arrested on suspicion of public intoxication after officers pulled over a Tesla driven by his fiance just before midnight on Dec. 11.

Iniguez, who is Gascon’s chief of staff, allegedly became belligerent and threatening toward the officer after the car was stopped for an illegal U-turn, the Southern California News Group reported.

Iniguez was arrested on suspicion of being under the influence of drugs or alcohol, a misdemeanor, and was booked into jail before his release about four hours later, police said.

The arrest took place with “deliberate indifference to the rights violated, despicably, and with evil motive and intent, in disregard” of Iniguez’s civil rights, the suit alleges.

According to the complaint, filed in Los Angeles federal court, Iniguez and his fiance, Dale Radford, were driving home from a wedding and stopped at the drive-thru of a fast-food restaurant in Azusa when an officer approached their vehicle.

Iniguez said he stepped out of the car to film the interaction because he was concerned for the welfare of his fiance, who was not arrested.

The suit alleges that the officer identified as R. Martinez asked Radford if he knew why he was pulled over and then stated that he was able to smell the odor of alcohol from inside the car. Iniguez told the officer that he drank earlier in the evening at a wedding reception and Radford was acting as a designated driver, and any odor of alcohol was from himself, the suit alleges.

After Iniguez began advising his fiance of his rights, Martinez—named as a defendant—allegedly told Iniguez that he was in public and intoxicated and that he would be placed under arrest, according to the complaint.

The suit alleges that Martinez told Iniguez that he appeared “incapable of following simple directions for your safety and the safety of the public,” and “therefore, [he was] being placed under arrest for public intoxication.”

Iniguez alleges that it appeared from the officer’s demeanor that Martinez was frustrated that he had advised Radford of his rights.

When he was taken to the Azusa police station, Iniguez contends he was asked by an intake jailer as to his sexual orientation.

Iniguez “declined to answer out of fear for his safety,” the suit contends. “Despite having no answer and no such information, the jailer entered Plaintiff’s sexual orientation as bisexual. Plaintiff was moved from an intake cell to a cell toward the rear of the jail that was dark, extremely cold, and isolated. Plaintiff did not have shoes or a jacket while in custody; as a result, the cold was oppressive and injurious.”

As a result of what he claims was a false arrest and its aftermath, Iniguez’s “emotional and psychological distress and physical injuries include sleeplessness, debilitating anxiety and yet to be diagnosed conditions, all of which continue to this day.”

Iniguez is seeking unspecified compensatory damages, including general and special damages, and punitive damages assigned to the officers involved.