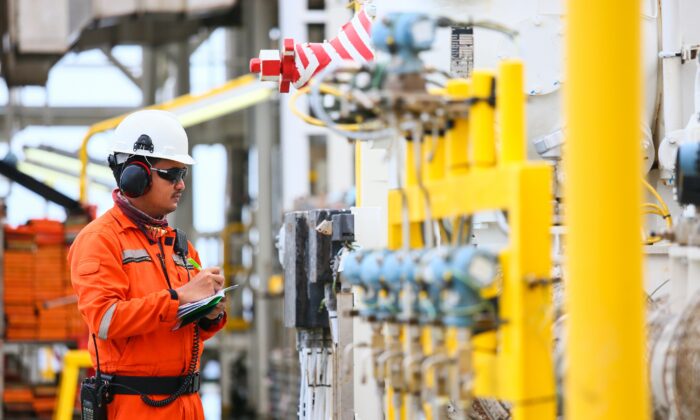 Australia’s gas industry is playing a substantive role in supporting the economy, while environmental groups have called to cut gas altogether in favour of solar and wind energy.

A report by the Australian Economic Advocacy Solutions commissioned by the oil and gas coalition, the Australian Gas Industry Trust, outlined that by June 2021, the industry paid $18.2 billion in taxes and royalties to local, state, and federal governments.

Gas companies directly employed more than 165,000 Australians, with $14.9 billion paid in wages to workers who earned on average $90,200 a year—considerably more than the Australia-wide average pay of $67,902.

The report also estimated that gas supported an additional 95,000 indirect jobs and nearly 24,000 contractors across all states, bringing the total figure to one in 46 working Australians being supported by the sector in some way.

“The Australian Gas Industry Supply Chain is of major importance to the Australian economy and community and has higher importance than many other industry sectors such as private health care, building construction, food retailing, road transport, agriculture, telecommunication services, private hospitals and accommodation,” the report states.

The report’s authors also highlighted that the industry represented a critical element for many of Australia’s remote communities.

“In regional areas, the gas industry acts as a foundation for prosperity across many townships due to supply chain spend and the livelihood provided to employees and their spend that this delivers to local businesses,” the report says.

Environmental groups have argued that renewable energy, such as wind and solar, could also provide new jobs in a growing industry while, at the same time, lowering carbon dioxide emissions.

A Clean Energy Exports Jobs report from October 2021 commissioned by the Australian Conservation Foundation, the Business Council of Australia, and other groups found that Australia could have an additional green-energy 395,000 jobs by 2040.

Climate change communications organisation, the Climate Council, has expressed frustration over the continued use of gas given its production of carbon dioxide.

“What part of gas is a polluting fossil fuel does this government not understand? This plan is a disaster. The science is very clear: to avoid a climate catastrophe; fossil fuels must stay in the ground,” Climate Council Head of Research Simon Bradshaw said on Nov. 26, 2021.

In a report titled “Net Zero by 2050,” the International Energy Agency (IEA) concluded that no new oil and gas should be developed to limit temperature below the critical threshold of 1.5 degrees celsius.

Australia’s push to reach net zero by 2050 follows a report by the Intergovernmental Panel on Climate Change (IPCC) that stated carbon dioxide was the primary contributor to climate change—however, this has been disputed by peer-reviewed research questioning the IPCC over its decision not to consider the effects of solar energy.

The government had commissioned the gas plant to make up for a shortfall in capacity after the announced closure of the ageing Liddell coal-fired power station in 2023.

Gas on the Path to Zero Emissions?

The federal government has pointed to gas as a critical resource amid Australia’s plan to shift to renewable energy generation and reduce carbon dioxide emissions.

This is because gas has the ability to support intermittent forms of energy generation, such as wind and solar, through its ability to fire up quickly when needed.

Iven Mareels, an expert in electrical grid systems and professor at the University of Melbourne, elaborated on this point.

“They can act quickly, and that ‘act quickly’ is important. The coal-fired power plant cannot compensate for the vagaries of PV and wind, but the gas-fired power plant can. If wind drops, gas can drop in almost immediately and pick it up where the wind left off,” Mareels told The Epoch Times on Jul. 19, 2021.

Mareels said that while he believed the transition to a 100 percent renewable grid was eventually necessary, doing so should require significant planning and consideration—particularly as nearly half of Australia’s energy is still derived from coal power.

“We can’t transition like a cowboy,” Mareels said. “We have to transition carefully.”

“Saying ‘we can do this overnight, take all the coal-fired power plants, and she’ll be alright mate’—it’s not going to work.”