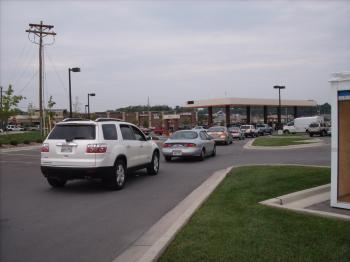 Long lines at the Home Depot gas station in Smyrna, TN on September 20. (The Epoch Times)
US

Gas Stations Low on Gas in Nashville and Environs

Sabina Kupershmidt
View profile
Follow
biggersmaller
Print
NASHVILLE, TN—In mid-September, gas stations in Nashville, Tennessee and in outlying areas started to close down in seemingly random spots. By Thursday, Sept. 17, the situation had become worrisome: drivers were  forced to drive extra miles  to find a station that was still open.

This weekend, according to the AAA, more than half of all gas stations were closed. News outlets reported that Hurricane Ike that roared into Galveston a week ago caused the closing of refineries, resulting in supply shortages in Middle Tennessee. It was unclear to many area residents why the shortages were confined to this geographical region. A gas station associated with the Home Depot Store in Smyrna, Tennessee, a friendly little town just south of Nashville re-opened on Saturday, September 20, and long lines formed immediately.

The supervisor at the Home Depot gas station, Ms. McKenna Fisher, said that she did not have any information on how long the situation was likely to continue. Meanwhile, customers were patiently waiting in line. Ms. Akilah King first noticed yesterday that there were long lines in front of gas stations. She had not been able to find an open station the day before but was finally forced to get in line today, when her warning light started blinking. Most people said they had been waiting for only 15 to 30 minutes, although on the previous day, the lines were much longer.

Devon Stuart thought it was curious that last week’s prices at the pump had risen to $ 4.21 while today, in spite of the short supply, gas was only $3.91. Apparently, price gouging is not a serious issue. Darryl Fritz, another customer, said he would try to keep his tank at least half full to prevent being stranded on the road.