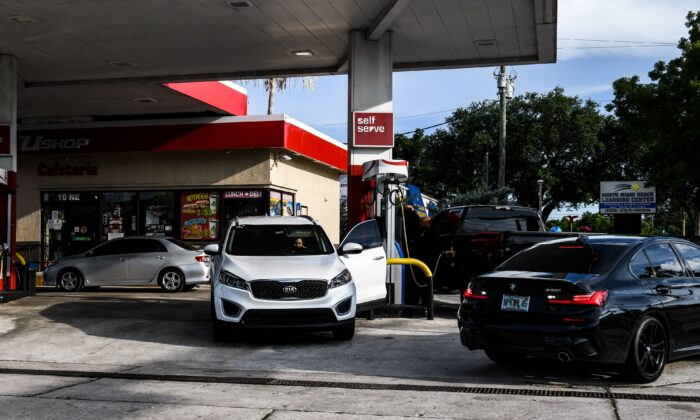 Cars line up to buy gasoline at a gas station in Miami, Fla., on May 12, 2021. (Chandan Khanna/AFP via Getty Images)
Economy

Gas prices hit a nationwide average of $3.08 per gallon on Monday, driven by the cost of crude oil.

Crude oil passed $70 a barrel, the highest price since October 2018, according to the American Automobile Association (AAA). Price per barrel has jumped $23 per barrel since January.

The rising cost per gallon of gas stems from the climb in crude prices, especially in light of falling demand and increasing supply, the group said.

“Motorists are paying, on average, 37% more to fill up than the start of the year,” Jeanette McGee, an AAA spokesperson, said in a statement.

“Prices for the rest of the month are likely to push more expensive, but if crude production increases, as forecasted, there is the possibility of seeing some relief at the pump later this summer.”

The U.S. Energy Information Administration is forecasting that rising global production of gas and other fuels will limit price increases for both WTI and Brent crude oil. U.S. production is projected to increase along with global output.

Brent crude was at $73 a barrel on Tuesday.

While production is going up, it’s the first time it’s gone up in a while, “and it’s still not going up as quickly as we would like to see it to cool prices,” Phil Flynn, an energy market analyst with PRICE Futures Group, told The Epoch Times.

“The natural gas traders are saying that they appreciate the extra production, but we don’t know if it’s going to be enough to meet what’s going to be some very strong demand going into the summer,” he added.

Bottom line is, prices will stay high for the near future.

Prices per gallon shot up in the spring after Colonial Pipeline took its major conduit, which spans from Texas to New Jersey, offline in response to a cyber attack in early May.

As usual, the highest prices are being seen by drivers in the Western U.S. and Illinois, with a peak of $4.22 a gallon. Drivers in the Midwest and South may see prices as low as $2.71 a gallon.

This week was the eighth straight week the national average price per gallon has risen, according to GasBuddy data from gas station price reports.

“We’ve seen the national average gas price continue to inch higher as oil prices have reached $71 per barrel, the highest since 2018, and as gasoline demand continues to rebound,” Patrick De Haan, head of petroleum analysis for GasBuddy, said in a statement.

“Strong gasoline demand as states and cities reopen will likely continue to be a major factor keeping gas prices elevated, even as oil production climbs in the months ahead. With most additional supply being gobbled up very quickly, gas prices will likely stay at elevated levels for the foreseeable future. Motorists can continue to fight the high gas prices by remembering to shop around each time they get below half a tank.”