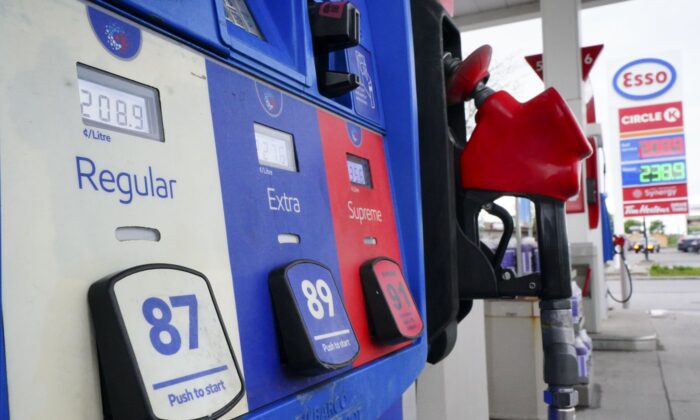 Gas prices are displayed in Carleton Place, Ont. on May 17, 2022. (The Canadian Press/Sean Kilpatrick)
Canada

Gasoline prices continued to trend upward across much of Canada over the weekend and experts warn more increases are coming this week.

National average gas prices rose to about $2.06 on Sunday, up almost three cents from the day before and 11 cents higher compared with a week ago, according to the Canadian Automobile Association.

On Sunday, Vancouver hit an eye-watering price of nearly $2.37 a litre over the weekend while Montreal posted gas prices just shy of $2.24 a litre, according to Gas Wizard, which is run by McTeague.

St. John’s hit $2.23 and Toronto approached $2.15 for a litre of regular unleaded gasoline.

Fuel prices are expected to creep up another three cents in the coming days, he said, with average gasoline prices forecasted to reach as high as $2.12 a litre across the country by late Monday.

In the Atlantic provinces, where gas prices are regulated, McTeague said regulators might use so-called interrupter clauses to introduce mid-week price hikes.

Gas prices have risen rapidly over the last year as a tight global supply has been worsened by the Russian invasion of Ukraine.

Prices have also been pushed higher by strong demand as the economy reopens and a busy travel season gets underway.

“Prices are continuing to move up, reflecting summertime demand,” McTeague said. “The demand for fuel continues to be very robust.”

Higher fuel prices have a knock-on effect throughout the economy, pushing up prices on most goods and hurting consumer sentiment.

“Energy prices have a cascading effect on the price of food and other goods,” McTeague said.

In a statement, CAA offered Canadians tips to improve the fuel economy of any car.

The organization said motorists should drive conservatively and avoid “jack rabbit” starts, rapid acceleration and hard braking, which can lower fuel economy by 15 to 30 percent at highway speeds and 10 to 40 percent in stop-and-go traffic.