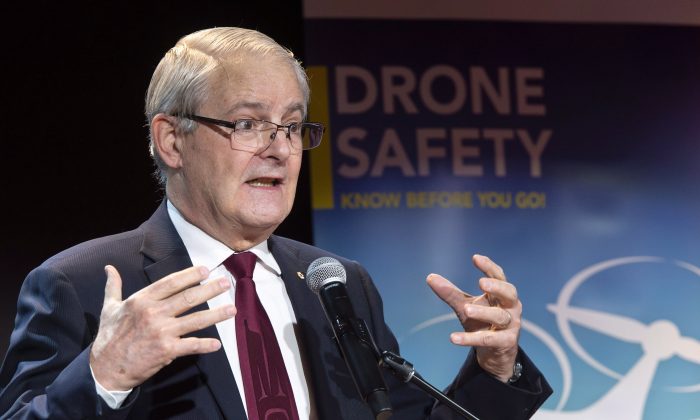 Garneau Meeting With Expert Aviation Panel, Has No Plans to Ground Boeing 737

MONTREAL—Transport Minister Marc Garneau has cleared his schedule for the day in order to meet with his civil aviation expert panel on how to deal with the issue of Boeing’s 737 Max 8 aircraft, which is being grounded or banned from a growing number of countries.

The 737 Max 8 continues to fly in North American skies, but faces grounding orders or airspace bans from all of Europe as well as Australia, China and other states in the wake of the Ethiopian Airlines crash that killed 157 people Sunday.

Garneau said Tuesday that he has no plans to ground Canada’s fleet of 737 Max 8 aircraft, but that “all options are on the table.”

“That could include grounding the planes, but at the same time I will evaluate all possibilities and not jump to conclusions before we can clearly evaluate the situation,” Garneau said, stressing he would not “be influenced by emotions.”

The Ethiopian Airlines crash, which killed everyone on board—including 18 Canadians—has raised concerns over parallels to a Lion Air crash of the same model of aircraft in Indonesia that killed 189 people last October.

Earlier Tuesday, authorities from the U.K., France, Germany and Ireland announced grounding orders or airspace bans on the aircraft. They were followed by similar orders from the Netherlands and Poland. Turkish Airlines also announced Tuesday it is grounding all Boeing 737 Max aircraft in its fleet until further notice.

A grounding order in Canada would prove costly for Canadian airlines, says Karl Moore, a professor at McGill University’s Desautels Faculty of Management.

“It would have a considerable impact on both of them, because that’s a lot of flights every day,” he said. “And they’re new planes that don’t require a lot of maintenance.

“You’d have to cancel some flights. You’d try to use other planes, which are suboptimal. A Q-400 is too small. You could use two big planes, which means that you’re wasting money on fuel and you’re not making money.”

The airlines are also confronting passengers who want to re-book their flights to avoid the vexed plane.

Flight Centre travel agency said Canadian airlines are not waiving flight-change or cancellation fees for passengers who want to switch to another aircraft.

The stance from Air Canada and WestJet Airlines Ltd.—which collectively tout 24 Max 8s in their fleets—comes amid a wave of requests from worried travellers so far excluded from goodwill policies.

Air Canada and WestJet did not respond to requests for comment on fee waiving.

“We continue to monitor the situation and based on current info, and recommendations by government safety regulators, Transport Canada, the FAA, and the manufacturer, we will continue to operate our normal B737 schedule and our current re-booking policies remain in place,” Air Canada said in a tweet Tuesday.

At least one of the airline’s flights has been affected. Air Canada Flight 860, scheduled to arrive in Halifax at 3 p.m. and return to London at 9:21 p.m. tonight, was cancelled.

Garneau said Monday that his department is working with the U.S. Federal Aviation Authority to determine if action is required.

Boeing said late Monday the FAA has told the U.S.-based aircraft manufacturer it must install safety-related software updates to the 737 Max 8s.