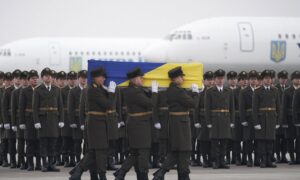 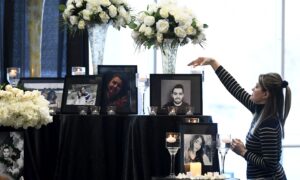 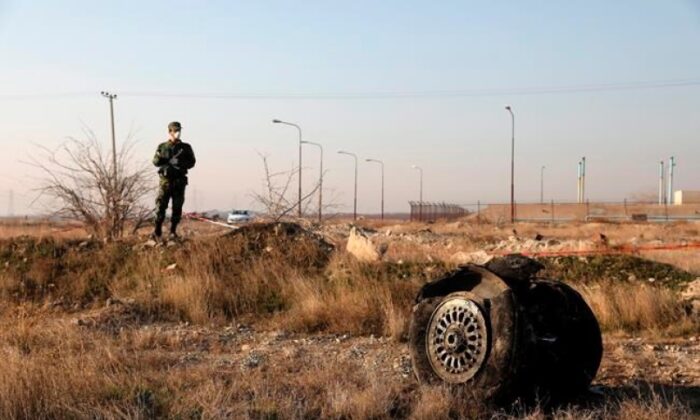 A police officer stands guard near debris from a Ukrainian plane which crashed in Shahedshahr, southwest of the capital Tehran, Iran, January 8, 2020. Two federal cabinet ministers say they expect more answers from Iranian officials about an air strike that downed a passenger plane earlier this year, killing everyone on board. (THE CANADIAN PRESS/AP, Ebrahim Noroozi)
Canada

OTTAWA—Two federal cabinet ministers say they expect more answers from Iranian officials about an air strike that downed a passenger plane earlier this year, killing everyone on board.

The Ukraine International Airlines plane was shot down shortly after taking off from Tehran’s main airport on Jan. 8.

On the same night, Iran launched a ballistic missile attack targeting U.S. soldiers in Iraq in response to an American drone strike that killed a prominent Iranian general in Baghdad on Jan. 3.

Iran initially denied responsibility before admitting—in the face of mounting evidence and international pressure—that the plane went down upon being hit by two Iranian missiles.

All 176 people on board the plane bound for Ukraine were killed, including 55 Canadians and 30 permanent residents.

The joint statement from the two ministers says the brief report mentions only what happened after the first missile struck the aircraft, but makes no reference to the second missile.

“We expect the Islamic Republic of Iran to provide an answer on important questions of why the missiles were launched in the first place and why the air space was open,” the statement says.

“These are the questions that Canada, Canadians and most importantly, the families of the innocent victims need answered.”

The “black boxes” as they’re colloquially known are a focal point in efforts to fully understand what happened in early January when the two military missiles were fired at the civilian aircraft.

Under international rules, Iran leads the investigation, with Canada, Ukraine and other countries playing supporting or observer roles.

Iran dragged its feet for months before finally transferring the data recorders to France for downloading and analysis last month.

The report made public over the weekend detailed only a period of a few seconds after the first missile detonated near the plane shortly after takeoff.

Iran’s civil aviation authority wrote that so far “there exists no voice or sign revealing the passenger cabin’s conditions in the recorded data and audios.”

Canada, along with the other countries that lost citizens on Flight PS752—Britain, Sweden, Afghanistan and Ukraine—signed an agreement July 2 promising to work together to force Iran to pay compensation to the victims’ families.

Over the weekend, the head of Iran’s civil aviation organization said his government will launch compensation talks in October with Canada and other countries.