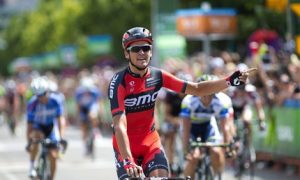 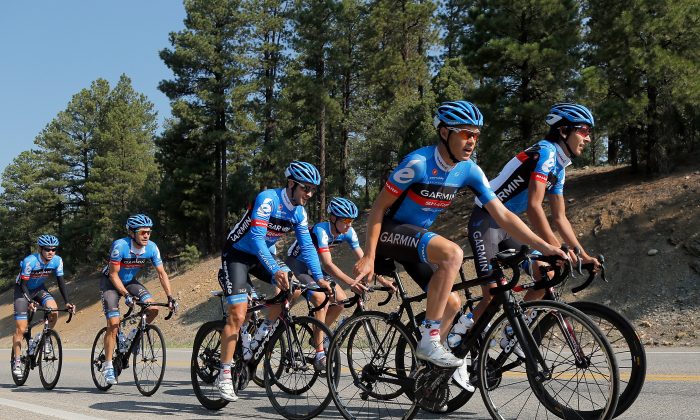 Lachlan Morton of Garmin-Sharp surprised everyone by attacking on the Cat One climb up Mount Nebo, catching the leaders, and soloing to the win in Stage Three of the 2013 Tour of Utah.

The 21-year-old Australian watched as a 20-rider breakaway escaped, opened a gap of three minutes, and shattered on the final long climb. He waited until most of the break had sat up, then attacked the peloton with just over 32 miles left in the 119-mile stage.

Lachlan charged alone up the first six miles of the climb, which averaged ten percent gradient, and  caught the two leaders, Carter Jones or Bissell and RadioShack’s Ben King, halfway up the climb.

Lachlan didn’t hesitate; when he caught the two leaders; he pushed right past them and rode them off his wheel, cresting the climb and starting the 22-mile descent with a ninety second lead.

Morton didn’t realize what he was asking of himself when he started his attack. “I sort of didn’t realize how far it was from the top of that last hill to the finish,” he told Fox Sports. “At the top of the hill I was ‘Well, maybe I’ve got a shot, and then I started looking at how far to go and I thought ‘It’s going to be a big ask.’

“It wasn’t quite the descent I thought it was going to be. There were a few more pitches and it wasn’t really straight to the finish so it wasn’t until the last K I really thought I could do it.”

Morton had a lead of 33 seconds when he crossed the finish line. The stage win earned him a ten-second time bonus, and he started 17 seconds down, so the young Garmin rider not only won the stage, he took over as race leader.

At 21, Morton is brand new to professional cycling, though not to Utah. “It’s my first year in the Pro Tour,” he said. “I’ve ridden here before a couple of years ago, it’s a race I really like.”

Not only a race he likes, but a win he will remember. “It’s taken me all year to find my legs but, yeah, by far the biggest win I’ve had. It’s great to back in the front of the race.”

Morton’s brave solo attack brought him to the front of the classifications:  he captured the race leader’s yellow jersey, the Best Young Rider jersey and the Most Aggressive Rider jersey all with one inspired ride.

BMC’s Greg van Avermaet outsprinted the rest of the chasers to take second, with UnitedHealthcare’s Lucas Euser third by one second. Van Avermaet remains second in the general Classification, 17 seconds behind Morton.

Stage Four takes the Tour away from the mountains for a day, but that doesn’t mean the day will be any easier. The stage is a 33.8-mile criterium—five flat-out laps of a 6.7-mile circuit around downtown Salt Lake City. There won’t be a second to rest as the riders negotiate the hilly route over city streets, and while the day may ultimately go to the sprinters, all the overall contenders will need to stay up front or risk losing time.