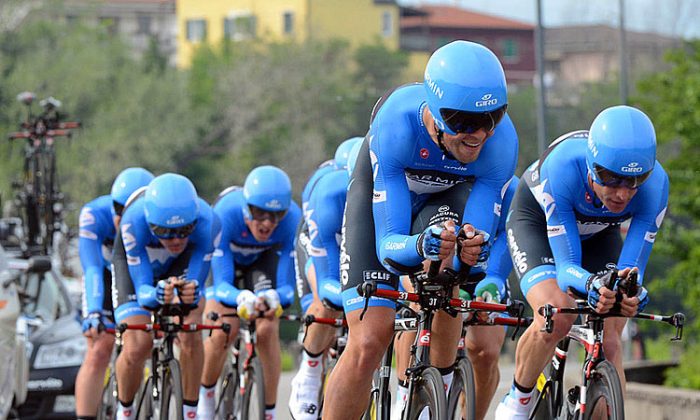 Garmin-Barracuda prepares for team time trials, and the effort paid off with a stage win Wednesday. (slipstreamsports.com)
Cycling

Garmin-Barracuda bested second-placed Katusha by only five seconds; Astana and Saxo Bank were each 22 seconds back.

Garmin’s Ramunas Navardauskas will wear the leader’s pink jersey for the start of Stage Five; he leads teammates Tyler Farrar and Robert Hunter by ten seconds, and Ryder Hesjedal by 11. Farrar and his leadout man Hunter will likely try to seize the maglia rosa away in Stage Five’s sprint finish—Farrar is the best-placed sprinter in the General Classification.

MC’s Taylor Phinney lost the race lead, and his team didn’t do well in the TTT, because Phinney couldn’t put full force through his injured ankles, which is still very swollen—the 21-year-old American rider needed four stitches after crashing Monday. BMC had to slow down and wait for Phinney on a couple of occasions.

Phinney is only 14 seconds out of first place, but he is not likely to do well in Thursday’s 123-mile stage.

Lampre was the first team to put in a really good time, followed by Katusha. Garmin, which puts a lot of emphasis on TTTs, then put in a great ride and gained the top four spots in the General Classification, and six of the top ten. Garmin’s Ryder Hesjedal, though young, could be ready a big results; Christian Vendevelde has had some good races ruined by bad luck; he is due for a good Grand Tour.

The big winner of the day is Katusha’s Joaquin Rosriguez, tenth overall, 30 seconds out of first. Rodriguez is the best-places of the big-name contenders. Astana’s Roman Kreuziger is a further ten seconds back, Liquigas’s Ivan Basso another seven. Basso’s teammate Sylvester Szmyd, who could be surprising in the mountains, is 1:07 down, and Lampre’s Michele Scarponi, a definite GC contender, is 1:22 behind the leader.