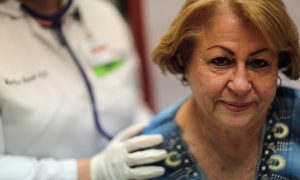 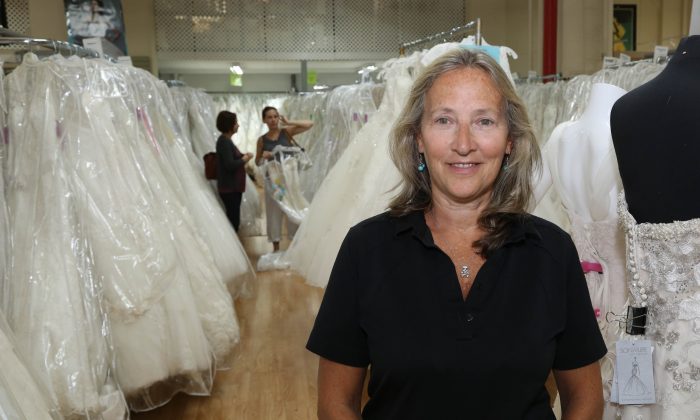 NEW YORK—Growth in New York’s garment industry could be limited by the federal government’s insurance overhaul.

At least one Manhattan-based bridal store feels workers don’t want to pay for insurance, so its owners will limit staff to avoid having to offer insurance. The company would also have to pay a portion of the costs.

In an effort to insure all Americans and make health insurance affordable, the Affordable Care Act (ACA) will require many businesses to sponsor health care plans for the first time.

Employers with more than 50 full-time staff will have to sponsor health plans, or eventually face penalties.

The owners of the upmarket RK Bridal, on West 39th Street, have kept the number of full- and part-time employees on their staff to 48 to avoid the compulsory health insurance requirement.

About half of the RK Bridal’s employees are part time. Many are students and young women with children. Some have health insurance already, but others don’t want it, said RK Bridal co-owner Candy Kantor.

Under the ACA, children and students can be covered on their parents’ employer plans up to the age of 26, and some of RK Bridal’s employees have medical insurance through their husbands’ employer plans.

Those who don’t have insurance would lose out financially if the business were to sponsor their insurance, Kantor said, because employees are required to pay a share of the premiums.

She said some staff only worked a few hours a week, and couldn’t afford medical insurance.

Kantor said some of her staff had suggested they would resign and collect free Medicaid care if asked to pay for insurance.

“It’s going to destroy a lot of stores that are large that employ more than 50 employees,” Kantor said.

She said stores were having a tough enough time as it is. “If you are a store that has to employ full-time workers, you can’t possibly keep up with the taxes in New York, and the medical,” she said.

The ACA could cause some businesses to postpone expansion plans, or even layoff existing staff, because subsidizing health care premiums could prove too costly.

RK Bridal co-owner Reed Kimmel said he had already considered other ways to get around the ACA.

“What we are probably going to plan on doing is spreading divisions into different corporations. This way what we can do is we can have one department that is under 40 employees,” Kimmel said.

He said employees had told him they would prefer to work out a payment with a hospital, if, at some stage, they needed emergency medical care.

He said the employer-sponsored health plans are not a free add on for employees. “It’s going to take money out of their pockets,” he said.

Kimmel said he had heard about business owners that were talking about firing staff to keep under the 50-employee threshold.

Nicole Miller employs about 125 people in its New York headquarters on Seventh Avenue.

Unlike some smaller businesses in the fashion industry, Nicole Miller provides a health plan for employees.

“To get good people we have to be competitive with the salary, the benefits, like health insurance, and also the work atmosphere,” CEO Bud Konheim said in a phone interview.

He said the alternative, not offering health insurance, would mean nobody would want to work for the company. “It’s very competitive.”

“People won’t take a job—they want to know they are covered for insurance,” he said.

But the cost has been significant. Konheim said that over the last year, as the cost of insurance premiums have increased, the cost of providing medical coverage for Nicole Miller employees had increased by $1 million dollars.

“We pay a big part of everybody’s premiums, 75 to 85 percent of the premiums,” he said.

About 25 of the employees, cutters and sewers, are union members, who get health insurance through their union.

Konheim said the first plan the company had offered about 20 years ago was with Guardian Life Insurance, which was the most comprehensive plan at the time.

As the price of medical care skyrocketed, Nicole Miller changed to the Oxford Health plan from UnitedHealthcare, he said.

“The last 15 to 20 years, no one is talking about the medical care, it’s all insurance.

“When you go to the doctor, you are not asked how you feel it’s who is your carrier,” Konheim said.

Konheim said his financial director had advised him to continue with the company’s existing health plan through UnitedHealthcare, rather than renegotiating with another insurance provider.

The ACA will allow employers to continue with their existing health plans if the plans were in place by March 23, 2010, when President Barack Obama signed the ACA into law. Those plans would then be called “grandfathered” health plans, and would not have to adopt all of the new standards.

Unlike new health plans under the ACA, grandfathered plans would not be required to cover free preventative care.