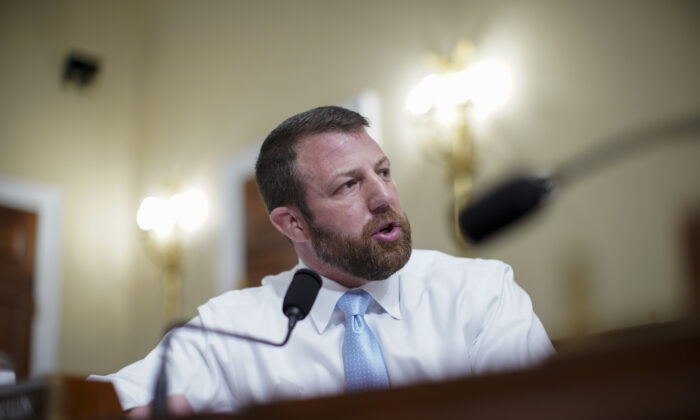 “This (Garland) is a guy who President Trump prevented from becoming a Supreme Court justice. He’s also a guy that is appointed by President Biden, who more than likely will be running against President Trump in two years,” said Rep. Markwayne Mullin  (R–Okla). “It (the raid) is clearly about politics.”

On Aug. 12, the seven-page warrant that granted permission for the FBI to search Mar-a-Lago earlier this week was released and shows that Trump is under federal investigation for obstruction of justice and other alleged violations.

The Department of Justice on Aug. 11 filed a motion to unseal the warrant unless Trump objected to the move. Around the same time, Garland announced that he personally approved the FBI’s search in Florida earlier this week.

Trump did not object.

According to the search and seizure warrant, FBI agents targeted “the ’45 Office,’ all storage rooms, and all other rooms or areas within the premises used or available to be used by FPOTUS (former president of the United States) and his staff and in which boxes or documents could be stored, including all structures or buildings on the estate.”

Agents were authorized to take “all physical documents and records constituting evidence, contraband, fruits of crime, or other items illegally possessed,” the warrant showed. Documents with classification markings and presidential records that were drafted between Jan. 20, 2017, and Jan. 20, 2021—when Trump was in office were included.

It is not known what the documents revealed.

The documents that were reportedly taken from were “all declassified” and agents “could have had [the documents] anytime they wanted without playing politics and breaking into Mar-a-Lago,” Trump wrote on Aug. 12. “It was in secured storage, with an additional lock put on as per their request.”

Trump added that former President Barack Obama “kept 33 million pages of documents, much of them classified. How many of them pertained to nuclear? Word is, lots!”

In 2022, President Joe Biden’s approval ratings have plummeted while government spending has escalated and inflation has soared. Republicans are confident the party will regain control of the House and the Senate, and Democrats are concerned about losing the majority in one or both chambers.

Democrats are spearheading the lengthy Jan. 6 hearings, and now an unprecedented FBI raid on a former president’s home occurs around three months before the crucial midterm elections.

Then, Garland revealed that he personally approved the FBI’s search of Mar-a-Lago.

Mullin believes the timing is not coincidental.

Hours after Scalia’s death, and before Obama tapped Garland as the nominee, Senate Majority Leader Mitch McConnell said any appointment by the sitting president would not be considered.

The next Supreme Court justice should be selected by the next president, McConnell said.

The Senate Judiciary Committee’s 11 Republican members signed a letter stating they would not consent to any Obama nominee. Proceedings were never held on Garland’s appointment.

Trump took office in January 2017, and in April that year, Trump nominee Neil Gorsuch was confirmed as the 113th justice on the nation’s highest court.

“The motivations for this investigation are overtly suspicious,” Mullin believes, because of Garland’s authorization, and the FBI’s “attitude towards President Trump and anyone associated with him” for several years.

“The weaponization and politicization of federal agencies is an attack on our democracy that we have now seen time and time again from the Democrat party in the last decade, from the Clintons to Joe Biden,” Mullin said in a statement.

“Political opponents have sought to undermine President Trump from the moment he ran for office, all while ignoring actual crime run rampant from their own families,” Mullin added.

“From my post at the House Permanent Select Committee on Intelligence, I will join Ranking Member Mike Turner (R-Ohio) with every resource we have available to demand immediate action by FBI Director (Christopher) Wray. The American people’s faith in our justice system is at stake.”

Mullin, who has served in the House since 2013 and is running against T.W. Shannon in the Oklahoma GOP U.S. Senate primary runoff on Aug. 23, told The Epoch Times that the House Intelligence Committee was never briefed about a potential raid on Trump’s personal residence.

“This is something completely unheard of when you start looking at what they’ve done to the president ever since he was even running for office,” Mullin said earlier this week.

“It’s been one hoax after the next, from Russia collusion to them saying they were going to be impeaching for political purposes—while they overlook all the stuff that the Clintons have done over the years, allowing her to literally acid-wash her emails after she was subpoenaed.”

The Democrats’ continued conduct towards Trump has resulted in a “boy who cried wolf” effect, and Americans are skeptical, Mullin added.

The raid “would probably have a little bit more of a wow factor if they haven’t been going after the president the entire time,” Mullin said.

A poll released by the Convention of States Action and The Trafalgar Group earlier this week showed that more than 70 percent of Americans and 83.3 percent of Republicans say the raid on Mar-a-Lago makes them more motivated to vote during the November midterms.

The survey indicated that 55.2 percent of Democrats said the Aug. 8 event increases their motivation to vote in the general election and 34 percent said that it has no impact.

“Independent and Republican voters are united in their outrage about this unprecedented and tragic event in American history,” Mark Meckler, president of Convention of States Action—a conservative group—said in a statement. “It’s clear to voters that the FBI raid is designed to punish the primary political enemy of the regime in power.”

The poll illustrates what Mullin says he has seen at campaign events across Oklahoma over the last week.

“I was walking into an event of more than 100 people as the news broke (about the raid),” Mullin told The Epoch Times. “I told the audience what happened, and there was a sense of anger but also an increased motivation about winning in November and in 2024.

“At every event I have attended (since the news of the raid was released), I’ve seen people who are angry, frustrated, and motivated, which is positive for Republicans (in the remaining primaries and in the general election),” Mullin added.

“I think it’s difficult for anyone to believe that this isn’t politically motivated, considering the FBI’s past actions and their attitude towards President Trump and anyone associated with him. There are real questions that need to be answered.”