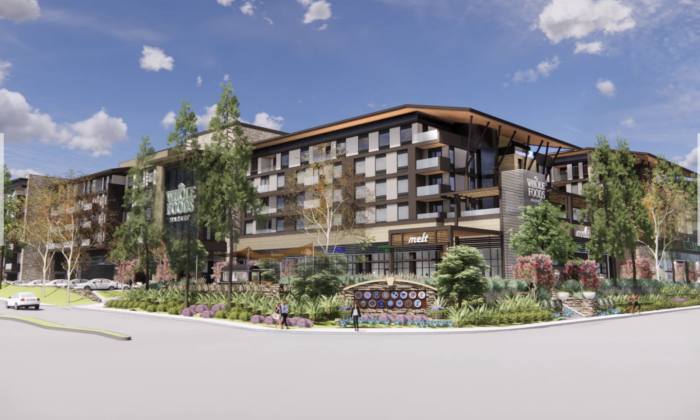 An artist's rendering of The Gardens. (Image courtesy of ValueRock)
Southern California

MISSION VIEJO, Calif.—The plan to build an apartment building with street-level retail had a setback April 11 as the city’s Planning and Transportation Commission voted against the developers’ request to rezone the land for residential use.

The Mission Viejo City Council, however, will have the final vote on the matter in May.

The proposed project by Irvine-based ValueRock Realty—called “The Gardens”—would have four stories for 234 apartments and 48,000 square feet of retail anchored by a Whole Foods market at street level.

It would also require the demolition of the “Garden Plaza”—a series of low-slung adobe-tiled buildings, constructed in 1975, for small businesses.

The land in question is at La Paz Road and Marguerite Parkway and is zoned for office and professional use only.

In order for the project to move forward, it would have to be rezoned as “mixed-use” for commercial as well as residential use.

Residents have complained the project is out of scale with the area and would increase traffic.

“The major problem we have is the overcrowding and [it] will be even worse,” one business owner told commissioners during the meeting’s public comment time.

One commissioner additionally said the proposed project was not a good fit for the community.

“We are and should be recognizably Mission Viejo,” Planning Commissioner Andrew Quinio said.

The City Council meeting, when the issue will be discussed, is May 10 starting at 6 p.m.