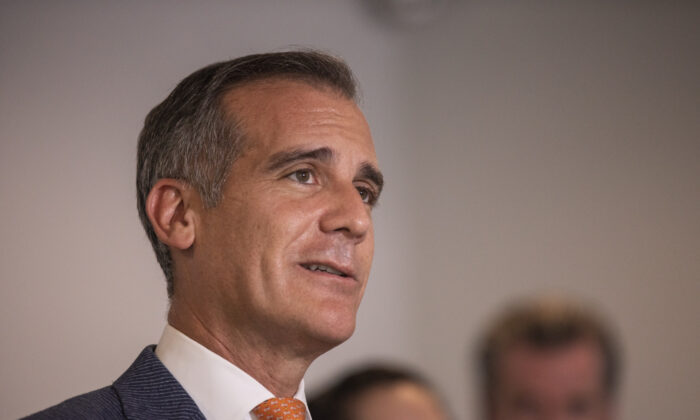 LOS ANGELES—The fate of Los Angeles Mayor Eric Garcetti’s ambassadorial nomination remains uncertain after a hold on a confirmation vote by the Senate was lifted on May 10.

The scheduling for a Senate floor vote on whether to confirm Garcetti’s nomination—by the Biden administration to become ambassador to India—remains dragged out by allegations that Garcetti was aware of the incidents of sexual harassment by one of his top aides but failed to address them.

Sen. Chuck Grassley (R-Iowa) lifted the hold after he published an investigative report (pdf) showing Garcetti “likely” knew Rick Jacobs, his former deputy chief of staff, “had sexually harassed multiple individuals and made racist and derogatory comments towards others.”

The GOP report comes as Garcetti’s nomination was placed on hold due to concerns from other Senate Democrat members about the allegations against the soon-to-be termed-out mayor. His nomination was approved by the Senate Foreign Relations Committee in January.

Though Grassley no longer objects to a consideration of the nomination, he said in a statement (pdf) that “based on what I have learned I intend to vote ‘no’ if the nomination is considered by the full Senate.”

Garcetti’s term as mayor will end in December.

Witness testimony, documents, physical evidence, and Jacobs’ own admissions show that “Garcetti was aware of this behavior,” according to the report put together by a group of investigators working for Grassley.

Based on how frequent the reporting was “and conspicuous nature of the conduct, it is more likely than not that Mayor Garcetti either had personal knowledge of the sexual harassment or should have been aware of it,” the report read.

According to the report, Grassley’s staff interviewed 15 witnesses, read 26 depositions taken in the course of a civil suit against Jacobs, and reviewed an earlier investigative report and a supplemental report commissioned by the City of Los Angeles.

Garcetti, who was elected mayor in 2013, said during a confirmation hearing on Dec. 14, 2021, that he “unequivocally” never witnessed any misconduct by Jacobs, “nor was it brought to my attention the behavior that’s been alleged.”

“I also want to assure you that if it had been, I would have immediately taken action to stop that,” Garcetti said.

Both Garcetti and the Biden Administration rejected the probe through statements to the press. A White House spokesperson said the mayor said under oath he never witnessed any misconduct and called Grassley’s report a “partisan hit job.”

“I hope the White House isn’t suggesting that taking seriously claims of sexual harassment and racist remarks is a partisan issue,” Taylor Foy, a spokesperson for Grassley’s office told The Epoch Times.

“We received multiple whistleblower complaints—independent of each other—that the mayor failed to respond to this activity in his own office,” Foy said.

Foy added that “some of the claims came from people who worked to advance the mayor’s political agenda—people who presumably are not Republicans.”