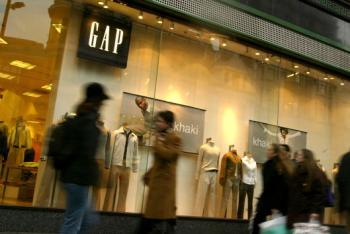 People walk past a Gap store on Oxford Street in London. The Gap Inc. is looking up lately as the company increasingly leverages social and environmental awareness programs to appeal to its young and progressive clientele. (Sion Touhig/Getty Images)
Business

By Heide B. Malhotra
Print
Clothing retailer Gap Inc., long suffering from stagnant sales, has seen its fortunes looking up lately as the company increasingly leverages social and environmental awareness programs to appeal to its young and progressive clientele.

Gap recently received 270,000 pairs of old jeans that it will turn into insulation for homes. In return, everyone who supported the project was handed a 30 percent discount on a new pair of “1969 Premium Jeans” from the Gap.

“The donated denim will be converted into UltraTouch™ Natural Cotton Fiber housing insulation for 500 homes in underserved communities and for special projects,” according to a recent Gap company statement.

In April 2010, Gap was awarded the 2010 Social Innovation Award. Around 100 firms were part of this two-year program and 11 top winners won based on developing innovative programs that focus on social responsibility in society.

Gap won the award for its GAP Inc. P.A.C.E. (Personal Advancement, Career Enhancement) program for women garment workers. P.A.C.E. was formed in India in 2007 and helps female textile industry employees move up the career ladder through education and training provided by the company.

“We are honored to receive this award as it recognizes P.A.C.E. for its innovation in advancing the women who make our clothes, enabling them to succeed not only inside the factory, but also in their community,” announced Bobbi Silten, chief foundation officer at the Gap Foundation, in a media statement.

For the fourth year, Gap received the “World’s Most Ethical Company” award in the specialty retail sector. They were awarded the 2010 award in March by Ethisphere Institute, a research-based international think tank. Best Buy, IKEA, and Target Corp. were among the other winners.

Since 2008, the company has also made the 100 Best Corporate Citizens list every year, published by The Corporate Responsibility Magazine. It ranked ninth among the top performers in 2009 and 2010 and first in the retailer category for the second year in a row. The rankings were based on seven categories, including environment, human rights, employee relations, and financial performance.

Sales Trending up
Gap, established by Don Fisher and his wife Doris in 1969, has since grown into an international chain with close to 3,100 stores and 135,000 employees.

The company retains in-house designers and produces most of its products in emerging markets.

Gap imports products from about 50 countries, and according to its social responsibility report, has not employed sweatshops since 2004. Roughly 22 percent of its products are made in China.

In March, sales were 12 percent higher than in the same month in 2009, and net sales were $1.3 billion. All of the company’s brands—Banana Republic, Gap, and Old Navy—experienced growth.

Given the weakened economy, stockholder value had taken a nose dive in the beginning of 2009, but it improved substantially in the fourth quarter, according to its annual report.

Chasing International Sales
Gap has 130 franchise agreements, operating stores in 20 countries as of the beginning of this year. At the end of last year, there were 173 Gap stores in Europe and 113 in Asia, as well as 27 Banana Republic stores in Asia and 3 in Europe.

Although the company produces only 2 percent of its total goods in the United States, there are 1,063 Gap stores, 975 Old Navy stores, and 538 Banana Republic stores in America.

“With Australia, we’re extending our international presence to a whole new continent,” announced Stefan Laban, vice president of Strategic Alliances for Gap Inc., in a recent statement. The first store will find itself in the Melbourne Chadstone Mall before the end of the year rolls around.

He continued, “We’re confident that we have the right partner to help us bring Gap to consumers in Australia, given their success bringing other international brands to the Australian marketplace.”

The company is ready to open its first stores in Italy and China. It will open two Gap and Banana Republic stores in Milan and is getting ready to open more stores in Rome by the end of 2011.